Posted by Kat on April 13, 2009
I've got Wii Fit and don't use it very often, so I bought a new game thinking it would make me use my balance board more and get engaged in using the Wii for fitness. I bought this on a whim while I was out at Target one day (I can't go in there without buying tons of useless - yet awesome - stuff). I got home and realized it doesn't even use the balance board! 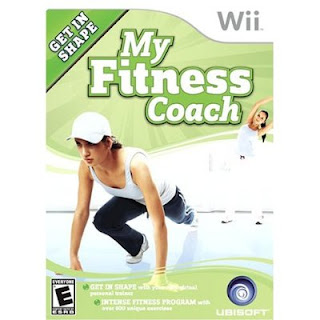 I did some research after the fact and read a lot of comments on the game...most all of them said it was an ass-kicker, yet it was really cool because it allows a lot of customization. It also tracks your progress through recorded body measurements and fitness tests.

I went through the set-up the first night I got it, recording all my body measurements and then taking the test (I couldn't even get through two straight minutes of jumping jacks, but I could do 50 squats without messing up form!), but it was late and I didn't want to start using it yet. Fast forward to 3 or 4 weeks later and I used it for the first time today. It really was cool and it kicked my butt (though I did it only 15 minutes and it was on the easiest difficulty level....[sigh]).

It allows you to make a commitment by "scheduling" when you'll use it. I've said I'll exercise for 15 min on MWF and 30 min on TThSat. I think it's got an option to substitute "outside" physical activity for one of the program's workouts, so you're not accused of not working out even if you already have elsewhere. We'll see how this goes!