A wardrobe of habit and a pasta-eating dog

It feels better to be writing a daily blog entry than to dump a huge steaming pile of rambling words on the page (though you might judge that that is exactly what this post is).  Although I felt I had to catch up and provide backstory for the past few days, maybe I should’ve just said “stuff happened, and we’re moving on.”  Still trying to find my blogger voice and not make it sound so “I did this, I ate this, then this happened,” but it’s a difficult task when you’re writing about what you did and what you ate and what happened.

I already started this entry, but my lovely laptop keeps dying.  It’s quite sad…I’ll be able to work on it for several hours or even a couple of days at a time, then I’ll restart it.  Then it’ll die 5 minutes into the session, so I have to hard reset it.  Then it’ll do it again.  Usually on the third try, it’ll be up and running for god knows how long.  Reason #86,490 I need a job…I need computer money.

So today’s eats were pretty ok…I need to start a challenge for myself to have a minimum of X fruits and veggies a day.  Veggies are the hardest to get in for me because they’re not always as convenient as I’d like them to be.  Or I’m just lazy or in a hurry to eat and don’t want to be bothered with time-wasters such as preparation.  Bah.  Alright, I’m going to do a 5-a-Day challenge starting tomorrow.  I want to have 5 servings of fruit and/or veggies.  I’d like to have more, but I want to start with something realistic.

Breakfast was a cereal/yogurt/fruit parfait…this one was Kashi honey flax, cherry almond yogurt, and bananas and blueberries, all with flaxseed on top. Boo for Live Writer not letting me round my Flickr image corners!  I forgot my camera yet again and was voracious enough to not want to run upstairs to get it before digging in, so I used my Blackberry (which is always glued to my body) camera instead.  When I import Flickr images using the Live Writer plugin, it doesn’t give me the rounded-corner formatting option.  Grr.

I did a lot of cleaning today; I’ll forever be cleaning.  I will never EVER be done cleaning.  I’ve got a Type A mind stuck in a lazy Type B body…I’ve got clutter and crap EVERYWHERE and it KILLS ME.  But I just keep accumulating and have a hard time wading through it all.  It’s pathological.  I digress. When I was doing laundry, I started folding my “brights” load and noticed a funny pattern in my tank tops/t-shirts/hang-up-shirts piles: Each pile had one instance of green, orange, and purple in it.  Funny, right?  I kept going, and here’s the final product (with a passed-out black cat in the background): You can definitely tell I’m a creature of habit.  My favorite colors are the cool ones – green, blue, purple – and my college’s colors are orange and purple.  As a result of those two facts, I obviously wear a lot of those colors.  Too much perhaps?  Add to that the unhealthy number of black items I have, and you’ve got one pretty boring wardrobe.  It’s difficult to dress when you’re overweight though…I have a lot of “safe” items that probably aren’t doing me any favors.

At lunch I tried a new product, a Morningstar Grillers Chik’n patty.  It was a bit funky – the texture was trying to be kind of moist like real meat, and it came out a bit weird.  The taste was ok…I wouldn’t have expected any better, but it wasn’t the best thing ever.  I prefer their original Chik patties – the fried texture masks the fact that you’re not eating real chicken.  The grilled texture - and I’ve found this with Quorn naked cutlets, too - has nothing to mask the fact that it’s not meat, so you get the full weird texture of the veggie protein.  Overall I liked it, but I’m not sure I’ll keep it as a staple in the freezer like I do with the Chik patties and Grillers Original.  I’m definitely giving it another shot though (and not just because I’ve got a few more in the box…I want to be fair) and I think I’ll make a parmigiana sandwich with it…slap some tomato sauce and mozzarella on there and see what happens.  I will definitely report my findings.

On the side, I had those amazing chips I mentioned earlier.  They’re Pesto & Parmesan-flavored “Dirty” Potato Chips and they’re some of the best I’ve ever had.

They were really herby and peppery, and I thought they’d leave a terrible taste in my mouth, but they were surprisingly tame in that regard.  This bag lasted me through lunch yesterday, lunch today, a tiny snack last night for Mom and me, and a tiny snack this afternoon for us both again.  It’s a pretty big single-serving bag!  I have a feeling this is going to be one of those things I will always keep an eye out for and will never find.  Their honey mustard chips are pretty darned awesome, also.  I’ve never been disappointed with any of their flavors, so definitely try them if you ever come across them!

Dinner this evening was a new favorite in our house.  It’s a Weight Watchers recipe, and the original recipe calls for shrimp, white wine, feta cheese, arugula, pimientos, and…other stuff perhaps…served over linguine (I don’t have the book in front of me and I’m too lazy to go check).  The first time we made it, the arugula was a bit too bitter for our tastes, so we’ve made it with spinach the last two times (which have both been within the past 3 days…it’s that good!).

Here’s a not-so-good video of my dog eating some…I thought it was cute, but it might not be so grand to outsiders.  Kinda like showing off wallet pictures of your grandkids…to you, it’s the most amazing thing in the world; to others it’s just boring and obnoxious. 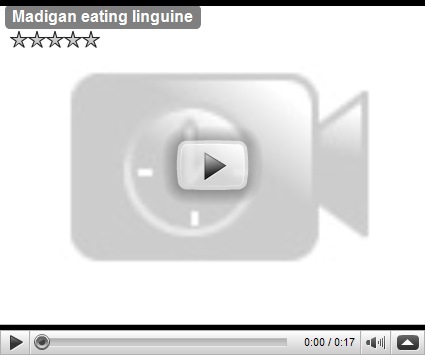 Dessert was an ice cream cone (half eaten before I remembered to photograph it, as per usual).  It’s Edy’s yogurt blends black cherry vanilla swirl flavor.  Pretty good…I like having chunks of stuff in my ice cream, so my tongue got bored (thatswhatshesaid), but it wasn’t bad.  I like the texture of that ice cream…it’s really light and almost fluffy.

Tomorrow I’ve got a load of stuff to do.  One of the things on my list is PICKING UP OUR BIKES!!!  We’ve gotten them serviced for the first time in over 10 years, so I can’t wait to get on and see if I really do remember how to ride!  I’m really looking forward to riding at the park; they’ve got such neat trails next to the river, and it makes you feel like you’re somewhere far away instead of just 15 minutes from home.  I’m off to start re-reading the Twilight series because, really, I’ve just completely given up at this point.  Stephenie Meyer owns my soul.  Since the New Moon movie is coming out in a couple of months, I’m starting over with that one.  And kissing my life goodbye.