I’m still exhausted from my 3 hours of sleep night before last, and I think I’m coming down with something, so I’m headed to bed early tonight.  I won’t recap the entire weekend, but it was spent celebrating this amazing woman:

Right after we took this photo, she’s all, “Do I have to wear this crown the whole time?”  She kept the boa on, though!  PS – Dontcha like how my eyes are like, half-closed (or are they half-open?)?  I was STRUGGLING.  I stayed up waaaaay too late because I’m a perfectionist (funny how I can be a perfectionist in some areas of my life and a total SLOB in others).

The weekend was filled with this…

(I made the banner, the tissue poms, and blew up the balloons with my coffee-scented breath) 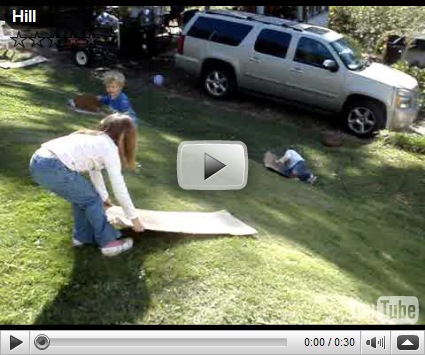 The thing that took the most time was restoring old photos and organizing them for my slideshow.  For music, I picked Jack Johnson’s “Better Together,” Ingrid Michaelson’s “Everybody,” and Israel Kamakawiwo'ole’s “Somewhere Over the Rainbow/What a Wonderful World” medley (the Hawaiian guy with the ukulele…probably everyone’s heard it).  Everyone liked it, but it wasn’t the “bringing down the house” hit I’d hoped for.  Maybe I’m just too sensitive/critical of my own stuff.  Ha, no “maybe” about it.  That’s definitely the case.

I was grumpy on Saturday due to lack of sleep, but I started out feeling good. I liked what I was wearing, I felt like I looked better than I had in awhile, but then Mom took a couple of pictures of me with people (the one up there included) and I looked at the screen and realized that what I thought I looked like and what I actually looked like were two TOTALLY different images.  I’ve described this to people before as my “reverse body dysmorphic disorder,” though that’s a pretty bad misnomer.  Actually I always feel like I look a certain way, but that certain way is very different from reality.  I have a really distorted perception of my size in my brain, and when reality dawns on me, it’s not pretty.  I never think I look as big as I am, and then I see pictures and want to hide from the world.  This has probably led to my aversion with mirrors in public, but that’s a whole different conversation, probably best had with me lying on a couch.

I know girls are hard on themselves, especially girls with “issues” like mine, but seeing those pictures pretty much ruined my day.  After I looked at the screen, my thought process was pretty much “well how can I go on having fun with everyone when they see THAT?”  I can’t be comfortable with how I look which makes me uncomfortable with other people, knowing that’s what they have to look at.  Then the monologue turns into some crazy existential crap and I just end up depressed.  Wow, this fun little “look what I did this weekend” turned into a Debbie Downer Diatribe.  Sorry, yo.  I’m keeping it, though, cuz it might strike a chord with someone.

I’ll return tomorrow with my usual “see Kat eat” post, most likely.  And I’ve committed to starting Jillian’s 30 Day Shred “with” Kayla tomorrow, so I’ll (hopefully have the strength to) blog about that as well.