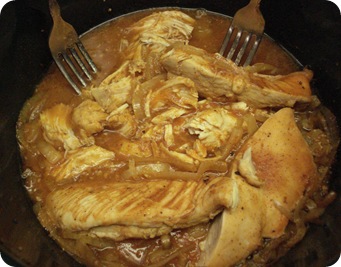 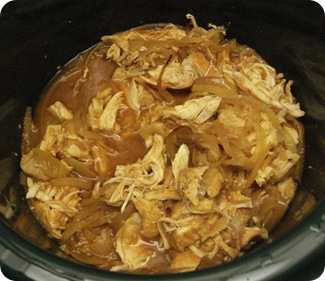 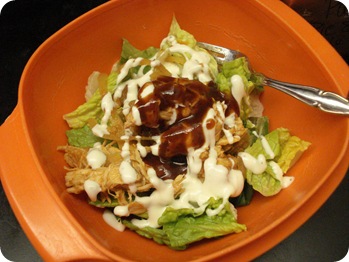 You’ll see that I used up my daily allowance of intellectual words on today’s earlier post.  Immaturity and crassness ahoy.Well last night’s dinner was a huge, embarrassing failure.  I thought I’d go all gourmet and whip something up on the fly.  Putting 7,000 pungent, aromatic ingredients together does not a tasty dinner make.I took a pork tenderloin, split it to open it up, pounded it thin, and sprinkled with salt and pepper.  Then I put arugula, gorgonzola cheese, and garlic down the middle, rolled it up, and baked it.  On the side I made onions and mushrooms sauteed in EVOO, beef bouillon, and  red wine.Here are the problems with this dish:the arugula was waaaaaay too spicy.  Is baby arugula milder? the gorgonzola was funky.  It was still well within the “best by…” date, but it tastes different than it did when we first opened it.  You know that scent/feeling of baby powder, how it kinda plugs up your nose and punches you in the back of the throat? (can you tell I detest, loathe, …

While I’ve been mulling over how to write my first post of The Society Series, I happened upon this quote by Ellen DeGeneres from Us Magazine that introduces my topic:
"It's a double standard because there are men with really beautiful women that don't have great bodies, and yet nobody's saying anything about that," she tellsKatie Couricon CBS Evening News. "Women [think they] need to keep themselves up to look good for a man or for society. It's not fair."I’ve only had a couple of boyfriends in my relatively few years on this earth, and while most of my dating history can probably be attributed to my…quirks, I can’t help but blame my appearance most of the time.

It has always irked me that society tells us that boyfriends/husbands can be fat but girlfriends/wives should be slim.  You see slender girls with larger boys all the time, but how often are those tables turned?  It’s rare to see an overweight gal with a “normal-sized” dude.  And i…

This post was supposed to be written last night, but then that damned Pregnancy Pact movie got in the way.  I had no idea Thora Birch was in it!  At first I thought it was someone else who just looked like her!  Her voice is so much deeper now…I wonder if she smokes? I digress…everyone on Twitter was abuzz about this stupid made-for-TV movie, so I had to see what it was all about.  Meh.  At least that solidifies my decision to not get sucked into dramatic TV programming…only comedy for this chick (save for Lost, which we’ll discuss more in a moment).

Before all the knocking up went down, I made an AWESOME dinner…as y’all know, I’m not 100% or even 75% happy to be eating meat for the short term, but I chose this program, and I’m  not whining.  It’s very rare that I eat red meat, but sometimes you just have an urge for a burger!  I decided to make this: