Posted by Kat on January 23, 2010
Hi, everyone!  I hope you’ve had a great Saturday!  I just got done doing a Tweetathon with Heather and Olivia – we were watching the SAG Awards and doing a semi play-by-play of the outfits and outcomes, and I might’ve been partaking in a vodka-based drink.  I think my tipsiness has worn off in the past hour it’s taken me to write this post, so let’s get to that recap, shall we?

I’ve indulged a bit this weekend (and it’s only half over!) but I’ve not fallen off the wagon.  “Off-plan” doesn’t necessarily mean “an entire pizza” or “giant pitcher of beer,”  and it doesn’t necessarily mean FAIL.  As much as successfully losing weight means following the rules, it also means understanding you’re not a failure when you don’t follow them 100%.  I’ve always been an all-or-nothing, black-or-white thinker, and I’m working at correcting that, one little (controlled) indulgence at a time!

Last night, I made a cocktail for Mom and myself.  This little blue wonder, a.k.a. indulgence #1,… 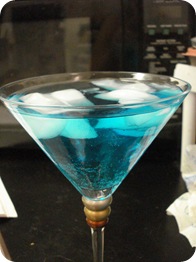 …contained a splash of blue Curacao, a splash of peach schnapps, a generous splash of vodka, and a bunch of Sprite Zero, all contained beautifully in the martini glasses Mom gave me for Christmas.  True to trend as of late, it gave me a headache about an hour after finishing it.  Bleeech.

Later for dinner, I had a crab cake I bought from Publix, alongside some steamed broccoli, some rice pilaf (indulgence #2), and a poor woman’s “remoulade” made from fat-free thousand island dressing + spicy southwest mustard (indulgence #3). 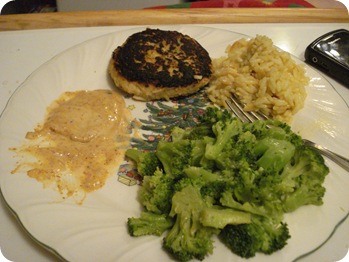 This morning for breakfast, I attempted to make an omelette and butchered it terribly.  I’m just not a good flipper.  So I took lemons and made lemonade a ruined omelette and made scrambled eggs. 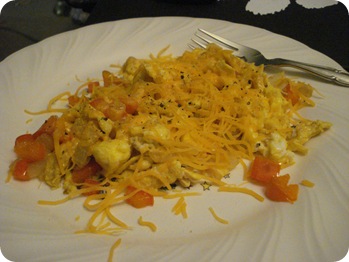 With onions, red bell pepper, a sprinkling of cheddar cheese (indulgence #3.5), and some iced coffee made with half a packet of my diet shake.

Mom and I visited my storage space today (where all my homeless stuff lives) to drop off a couple of boxes and to go searching for clothing.  I brought home two big boxes of clothes I have yet to go through as well as a beautiful lamp I forgot I had!  Perfect for someone who’s “outgrowing” a bunch of fat clothes and who was searching for a new lamp for her rearranged room!  While we were out, I got a small nonfat, sugar-free latte (indulgence #4), and had half a Reese’s Christmas tree in the early afternoon (indulgence #5). 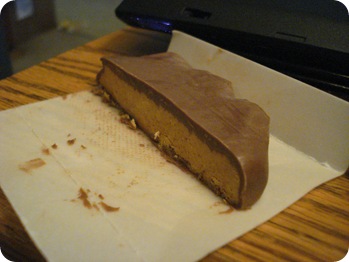 After working on stuff around the house, I made a mocktail with Sprite Zero, a splash of lime juice, and a splash of marachino cherry juice (with a cherry!).  It wasn’t exactly on-plan, but it wasn’t as bad indulgent as the other things I’m counting. 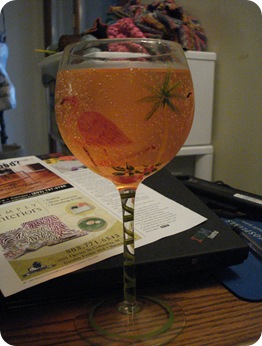 This afternoon I got hungry, probably because A) I didn’t have the proper breakfast/lunch I’m used to having, and B) I’m not used to sugar crashes!  I had a leftover chicken tender from the other night with some ranch + Tabasco: 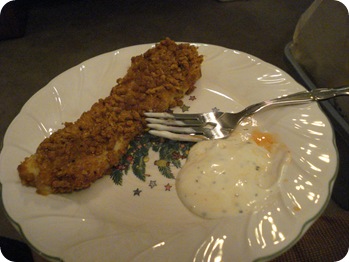 I shared 1/4 to 1/3 with my dog and cat.  Aaaand those two rascals also got about 1/3 of my barbequed chicken at dinner.  I’m such a sucker. 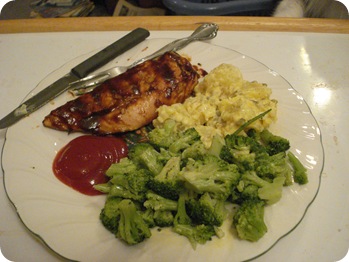 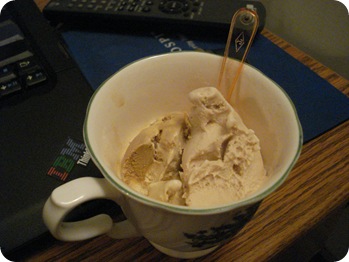 So while this weekend’s 7 indulgences thus far don’t nearly match those that I used to partake in OR throw me completely off-course, they were definitely out of the ordinary.  I’m trying not to beat myself up, especially because I made conscious decisions to eat or drink all these things, but it’s difficult when I’m used to thinking in terms of SUCCEED or FAIL.

I’m all out of cleverness for now (and my attention is being stolen by Meet the Parents, so I’ll just ask: can you identify with the “purposeful indulgence/guilt” cycle I’m trying not to get caught up in?
Blogger love Indulgences rambling