Posted by Kat on February 03, 2010
I just watched the premiere of Lost and will most likely be re-watching it again soon.  I tried doing some “mindless” activities while I watched – it just can’t be done.  I miss key points, I lose track of what’s going on…when Lost is on, I need to sit with my nose to the screen and not budge.  Having said that, I’m so glad it’s back, and I’m looking forward to some answers finally as this final season wraps up (not that I’m in any hurry for it to end!)!. 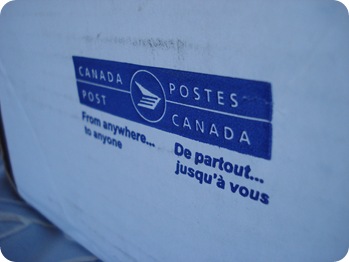 …even if I had to face my poor mail carrier in my PJ pants and a wifebeater.  At 1pm.  No shame.

Jaime from Embracing Balance and I did a cross-border exchange (see what I sent her!) and I got some flippin’ awesome goodies all the way from Nova Scotia!

My loot was contained in this sweet tote bag (can I be inducted into the Lululemon club now that I own something with their logo?): 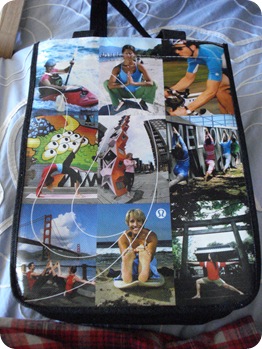 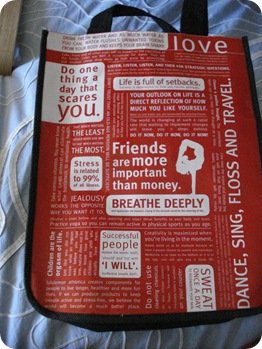 And here’s the awesomeness contained within… 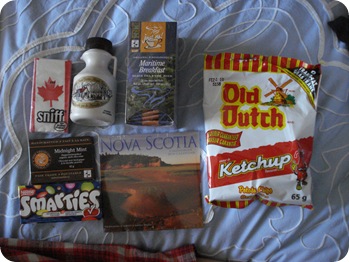 Jaime, thank you so much for doing this exchange with me!  I really appreciate all the local goodies you shared!

Tonight I tried a pulled pork recipe that Mary Clare was so sweet to send me after reading my crock pot pulled chicken post.  It would’ve been perfect had I paid 100% attention to the instructions, but my roast was like 50% bigger than the recipe called for, so it didn’t shred like I had hoped it would by dinnertime. 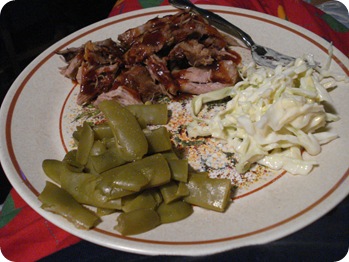 I used my Sticky Fingers Carolina Sweet BBQ sauce on top and had green beans and some fake cole slaw on the side (cabbage + dollop of mayo + dollop of sour cream + cider vinegar + squirt of mustard + Splenda + pepper).  I thought I was only using a little bit of mayo and sour cream, but it turns out I would’ve been fine with 1/3 the amount I used.  I had a recipe for the slaw in mind, but it would’ve taken longer than I had, so I threw this together at the last minute.   After dinner, I kept the rest of the roast in the crockpot for a couple of hours, and it turned out PERFECTLY.  I have a feeling I’ll be using this for several meals to come.

Alright, I’m waaaay past loopy with tiredness, and I’m dreading my weigh-in tomorrow morning.  I haven’t been doing so hot lately.  Oh, and that goal checkup I posted the other night?  Not doing great in that regard either.  Sigh.  How can I be unemployed and still so busy as to let stuff like exercise slip?  I’m such a headcase.

So, wrapping this up, if you were sending a care package to someone from another country or distant state, what local goodies would you put in it?  Does your region have any weirdly unique items that make “foreigners” cringe?
Blogger love Crock pot Goals New food Recipe TV