Posted by Kat on February 22, 2010
This past weekend was our 2nd work weekend at the lakehouse (our 1st one was recapped here).  While I only worked one day last time, this time I stayed from Friday to Sunday (read: worked twice as hard as before).  Everything is still sore.

On Friday, my uncle cut down three trees on the property, and we all helped haul them down to the bank limb by limb. 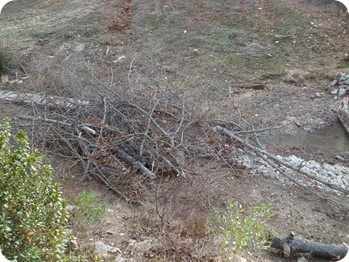 First mistake – instead of drinking ALL my shakes that day like I should’ve and then supplementing as needed with proteins and veggies (not on the agenda this week, but I’d totally allow it after working hard), I only had my first morning shake and then subsisted on trail mix all day.  TRAIL. MIX.  With M&Ms.  Not the worst thing in the world, but it didn’t do me any favors.  And here’s the kicker - I planned well.  I set myself up for success.  I brought all my shakes along with me.  However, in the face of temptation, I go for the easiest, tastiest option – not the best.  Looking back, I should’ve set an alarm and stopped to take a shake break every 3 hours, no matter what.  That way, I would’ve had a slap-upside-the-head cue and might’ve been more likely to act.  [sigh]

That night, I made mistake #2 – getting the guys to pick up a 6 pack of Blue Moon for me at the store “because I’d earned it.”  Here I go again with my “I deserve a treat” thinking.  Waiting until this week to treat myself by getting a massage would’ve been a much healthier plan, but I had that “I need to unwind” feeling, and hard labor calls for beer.  So I had 2 on Friday night and might’ve participated in some Dreeting.  I purposefully DIDN’T bring beer for this reason.  I stopped at the store on the way to the house and totally could’ve gotten some, but I deliberately passed over the beer because I didn’t want to sabotage myself.  However, in the passion of the moment (i.e., after hurling logs for a few hours), I caved…as usual.

The next day, we were joined by several more family members and participated in a few projects.  My team took the giant pile of tree limbs and trunks, cut them to manageable size, and burned them at the water’s edge, then we shoveled off dirt that had washed around our boathouse and boat ramp. 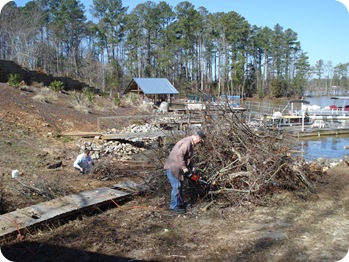 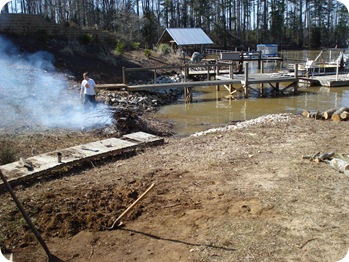 Lifting and carrying and throwing those limbs and shoveling all that dirt reeeeeally took a toll on me.  It wasn’t the most brilliant thing to go on an all-liquid diet when 2 of the 7 days on said diet would be filled with hard labor.

So on Saturday after a particularly hard bout of shovelling, I went inside to catch my breath only to beat the lunch crowd by about 5 minutes.  I snagged a breadless sandwich from the kitchen… 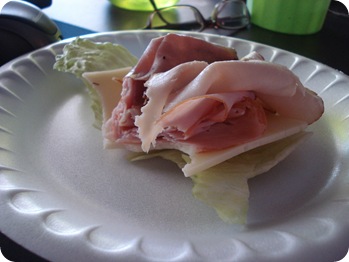 …and had a 2nd unpictured one about half this size a short while afterward.  I’m not counting these as mistakes, because I truly needed more calories from healthy sources.  This was lean lunchmeat, a piece of cheese and lettuce, and mustard.  Mistake #3 was following it up with… 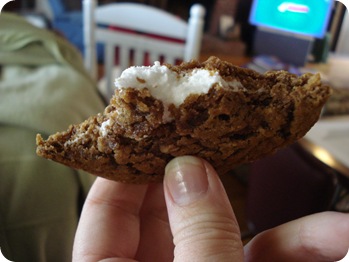 …one of these little cream-filled Little Debbie oatmeal cookie pie thingamagigs.  I used to go apeshit over these as a kid, and I learned this weekend that I haven’t grown out of it; I had a 2nd before the weekend was over.  Oh, and before I went back outside, I also had a brownie and slice of poundcake.  WTF, Katherine?!?!  Neither were particularly good, either – it so wasn’t worth it!  Yes, I was participating in some heavy physical activity and needed sustenance, but that doesn’t give me the excuse to reach for empty calories, simple carbs, and sugary sweets.

I went back outside, got back to work, dog-sat a bit (or rather, he sat on me)… 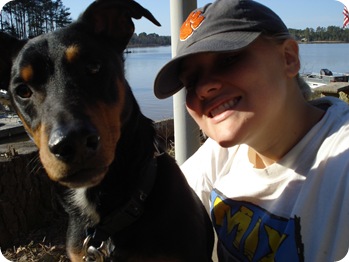 …and grabbed my first beer of the night at around 6pm when the bonfire got good. 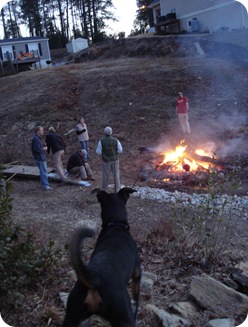 I get this way about quantity – when I lived alone, I’d make a HUGE batch of pasta + sauce + vegetables + cheese and eat it out of a ginormous bowl.  Now, lots of people say that’s the wrong thing to do because you have no visual cues about when to quit.  However, that’s the only time I’d get to practice listening to my stomach, and because I knew I couldn’t eat the whole thing, I’d stop when I was full.  If I served myself a certain amount, I’d most likely jump back up and get more, even if I wasn’t still hungry.

This is the problem with the 6 pack – I wanted to finish it all.  If I had gotten a larger quantity, I probably would have stopped earlier because 1) there’s no way in hell I could drink all of them, and 2) I’d have lots of leftovers to take home.  For some reason, I thought “oh, I’d better finish it off.”  Why?  Because I couldn’t leave two in the fridge for next time I came up to the lakehouse?  It’s stupid to bring two home with me?  I’m the same way with chocolate – if it’s a HUGE quantity, I’m better about portioning it (ok, who am I kidding? I’m terrible at portioning it), but if I CAN finish it all in one sitting, I’ll probably succeed or get sick trying.

And because my inhibitions were lowered, I ate bread for dinner.  Just bread.

The next day was lower-key, labor-wise, but my aunt baked cookies.  Y’all know where this is going.  I had my breakfast shake, worked a bit outside, had some meat and cheese for lunch (instead of one of my lovely shakes packed in my cute little lunch bag), then followed it up with…4 cookies maybe?

I’m trying not to beat myself up over this weekend, but it’s hard.  I put certain measures in place to help myself succeed, but I always stop short of making certain I DO succeed.

I find loopholes.
I make excuses.
I fall into old patterns.

I can pinpoint exactly what went wrong and the line of thinking that led to it.  Hell, I realize what’s going on AS IT’S HAPPENING, but it’s somewhat rare that I stop it in its tracks.  It’s been known to happen, but it doesn’t happen often.  This is probably leading to a post I’ve been mulling over for awhile on self-sabotage, so I’ll stop it there, lest I give away all my secrets early.

Does anyone else have this issue with portioning and cues to quit?  What about rationalizing “I deserve this [treat/out-of-the-ordinary food] because…”?


**Editing to add that I bounced back today - I'm back on-point with my diet, and I haven't been a total Debbie Downer, despite what this post might suggest!
Beer Family Setback