I’ve been posting too many serious/deeply psychological/Debbie Downer posts lately, so I’m going to attempt a fluffy happy one today.  Also, I just installed the Disqus commenting system, and I need to give it a whirl.  I like to respond to every single comment, even if it’s just something short like “nice pic,” so this way, I can use threaded comments (i.e., responding to each individually) instead of posting one massive lump response comment to everyone.

Yesterday I went to the doctor to check in, and I lost 3.5lbs last week.  I’m having a little reality check about it; I was hoping to lose close to 10lbs doing all-liquid like I did the first week I tried it, but there were some holes in my plan.  1) The first week I did it, half of the weight I lost was water.  It spoiled me to lose close to 10lbs and skewed my expectations.  2) I CHEATED.  3.5 pounds is a lot to lose in a week, especially after a beer binge, so I’m slapping myself in the face, patting myself on the back, and moving on.  Operation 13 by 26 was unrealistic, so I’m scrapping it.  My body will get below 200 when it’s good and ready.

By the way, my doc had some interesting insight into the relationship between alcohol and weight loss.  Insulin helps your body store glucose, and glucagon has the opposite effect – it helps your body take glucose out of storage and burn it.  Well, alcohol inhibits glucagon, so there are no glucose withdrawals, only deposits when you drink.  I’m sure I learned that in the endocrinology class I took a million years ago, but it really puts it into perspective when you think about it in terms of metabolism and weight loss.  She also estimated that for every alcoholic beverage you drink, you keep yourself from losing as much as a pound.  Now, I don’t know where she came up with that figure, but its enough to scare me into being a teetotaller (almost).

After my appointment, I met up with my cousin who works on that side of town.  He’s always kind of been the big brother I never had (and he’s got a pretty bitchin’ girlfriend – Hi, Susan!!), and he’s such a sweetheart, he paid for my lunch!  We went to Applebee’s, and I got the Grilled Chicken Dijon and Portobellos off the Under 550 Calorie menu; it usually comes with mashed potatoes and steamed veggies, but I got double veggies instead (by the way, it’s funny how their “seasonal” vegetables happen to always be the same everywhere at every time of the year.  “Seasonal,” my foot.) 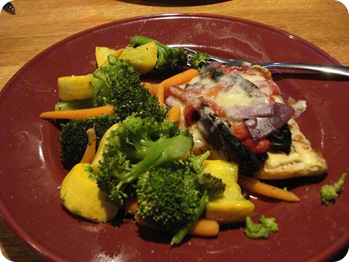 After finishing lunch, I had some errands to run.  I returned to Jewelry Warehouse to find something to put my birthday coupon toward, and I went to two of their locations before finally finding MY RING.  And I was told they didn’t make them big enough for my middle finger…psh. It sounds cheesy, but I got it so I could wear it all the time as a reminder of my long-term goal.  Hopefully as I reach for food/drink that are counterproductive to weight loss, I’ll take a split-second to look at my finger and think to myself, “is it really worth it?”  I’m hoping it will serve as a cue to action for me.  A few people in an old Weight Watchers group of mine utilized this strategy and it helped them make better decisions.

So back to eats; I had a couple of shakes yesterday, and last night, I got the munchies.  I need to plan better.  Maybe if I say it enough, I’ll magically wake up one day and start doing it.  I know, I know, that’s not how it works….  Last night I had a couple of potato chips with beer cheese dip (uggggh – at least it wasn’t a handful!) and turkey and cheese. 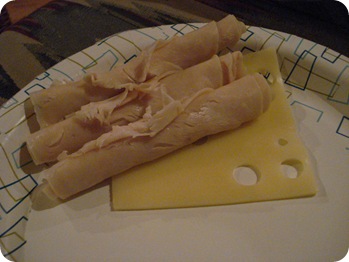 I must not have ever had swiss cheese by itself before, because it sucks!  Or maybe this was just a bad batch…I’m not a cheese connoisseur.  It was waxy in texture, not very flavorful, and therefore not worth it, so I ate a couple bites and gave the rest to the dog.

I’m so over this whole poison ivy nonsense.  It stings, it itches, and it makes me look like a leper.  The first night I realized what it was, I went to bed in these sexy gloves I got from Delia*s back in the day: 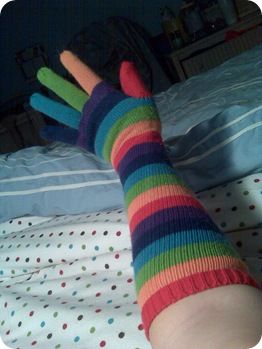 and actually managed to keep them on all night!  They were kind of snuggly, and they kept me from scratching (I think).  Then last night, I kept wanting to scratch when I was doing stuff around the house, so I fashioned myself a pair of arm covers out of an old pair of tube socks. 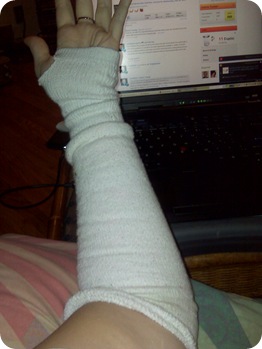 Sexy, right???  They did what I needed them to do, though!

Thanks to all of you who have joined our iChange support group – I’m still trying to learn the ins and outs of how the site works, and it’s helping to realize that everyone will be able to see everything I eat, for better or worse.  I’ve already gotten some feedback about a little chocolate meltdown I had yesterday, so it’s helping me to be up front and honest about my setbacks and really analyze why the happen and how I can deal with them in the future.  Haven’t joined yet?  You still can!  Sign up – all the cool kids are doing it!