Posted by Kat on February 09, 2010
Yesterday I made a cake.  This cake.  For our friend Debbie’s birthday.  It had 3 different kinds of chocolate, real butter, and real cream.

A brownie base, mousse layer, cake top, and ganache frosting. 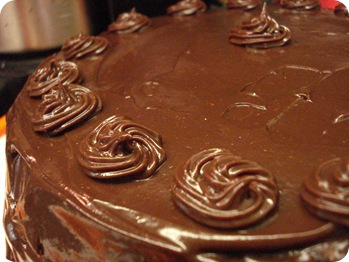 I made it, stored it in the fridge, and cleaned up the dishes…with my tongue.  Today, I had my one piece I requested Mom bring back for me (the party was at work)… …and tonight I ate more of the mousse and ganache that I had left over from yesterday.  I should’ve thrown it away last night.  Why on earth would I keep it?  If I keep it, I’ll eat it.  Case in point: I DID.  Not all of it, but some.  Enough that I’ve got a stomachache and a headache (I actually feel drunk right now, and it’s all because of that sugary crap), and I’m super mad at myself.  There was NO reason for me to keep those cake constituents when I knew in the back of my mind I was just keeping them to eat them.  It’s an old trick of mine – I’m “afraid” of throwing stuff away, and when I don’t throw it away, I just eat it.  OK.  I did it, I regret it, I’m moving on.

So along with my 13 by 26 challenge (which today’s setback might’ve totally screwed up), I’m giving up sugar.  It shouldn’t be a big deal – my current diet is should be sugar-free anyway.  This huge declaration of “I’m giving up sugar” should already be put into play.  However, sugar leads to sugar cravings which lead to BIGGER sugar cravings.  One little episode of slipping up led to even more episodes of slipping up, so I’ve got to nip this in the bud before it gets even worse.  My weight loss over the past few weeks hasn’t been nearly as impressive as it was a month or so ago, and I know it’s because I keep slipping up in small ways that snowball into bigger screw-ups.  It’s got to stop.

Earlier today after my one slice of cake, I had a sugar crash from hell – I could’ve laid down on the floor and taken a nap, it was so bad.  And now I’m sitting here with a post-sugar headache to rival that of a hangover.  So I’m catching up on Google Reader, and Mary has written a post about cutting sugar out of her diet.  I’m not sure I believe in “signs,” but I definitely took it as a cue to action.

No more sugar.  No more random, undocumented spoonfuls of peanut butter out of the jar, no more mini handfuls of chocolate chips when I need a pick-me-up.  No more chocolate, no matter where I get it or in what quantities.  Also, no more alcohol!  I’ve had a few drinks in the past couple of weeks, and that’s a few too many!  I was perusing cake recipes tonight (coming down off my “I just baked a friggin’ awesome cake” confidence high) to make for my birthday in a couple of weeks, but I’m not going to bake one after all.  We’re going out to a tapas restaurant and a place with awesome desserts for my birthday, and that’s it.  I don’t want a big cake here at the house that I’ll have to eat for a few days to get rid of.  I want to practice the one-shot-and-it’s-done thing; I’ll have my slice of cake and be done with it.

I see myself falling down the same paths I’ve been down way too many times.  I can’t keep falling victim to my own tricks, because I’ll be 270lbs again and battling heart disease or diabetes or a gallbladder attack.  So here it goes – DETOX.

This sounds terrible, but please don’t leave a comment about how dangerous it is to let yourself do the things I’ve been doing, because I know, and I keep beating myself up about it.  It sucks so much to be chastised by others for the things you know you’ve done wrong.  I’m saying it in a public forum because I’m trying to be honest to y’all and to myself.  “Saying it aloud” is a lot healthier than other coping mechanisms I’ve turned to in the past, so I’m trying this for the sake of my sanity and for accountability.

It’s not enough to say “no more sugar” because that’s putting a lot of pressure on my willpower; I have to help myself by putting healthy habits to work.  I’ll be getting some healthy snacks to keep my hands and teeth busy when I’m craving something sweet instead, and I’ll be putting a few barriers between myself and my triggers (i.e., putting peanut butter and chocolate chips in multiple boxes; it’s not realistic to throw them away at this point since I’m not the only person in the house).

This post has dragged on long enough, and my headache isn’t getting any better, so I’ll end it there.  Does anyone else want to join Mary and me in kicking sugar to the curb?  Have you done this before with success?  What kinds of things did you do to ensure your success?
About me Challenges Indulgences Setback