A day which shall live in infamy

February 28th. My birthday. The day during which I ate enough sugar to give me a hangover on March 1st. Though it was so worth it.

After I felt kinda poopy about my birthday, I cheered up when Mom offered to get Panera takeout for lunch. Because it was my birthday, I threw caution to the wind – I usually just get a salad, but I opted for a half fuji apple chicken salad and half of my absolute favorite – French onion soup with cheese, croutons, and a whole grain baguette. I could probably subsist on that soup every day if given the opportunity. That, and my buffalo chicken salad. 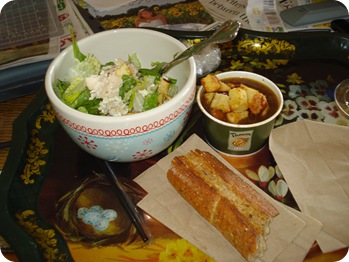 Also, Mom brought me some of my favorite flowers – tulips! 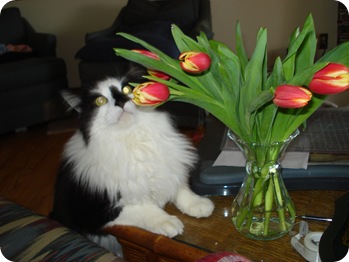 Brooks is thoroughly enjoying them. After lunch, Mom surprised me yet again… 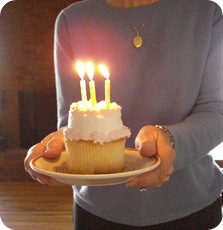 …with a ginormous birthday cupcake! She was so nervous that she was throwing me off my diet, but I had prepared to go a little hog wild on my birthday, so I was glad to partake! Apparently she couldn’t choose between chocolate and vanilla, so she got both.

We split the vanilla one after lunch and had some Ben & Jerry’s Half-Baked FroYo alongside it. I could’ve done a better job of picture-taking (moving the damn newspaper and scotch tape, for instance), but I was in too big a hurry. 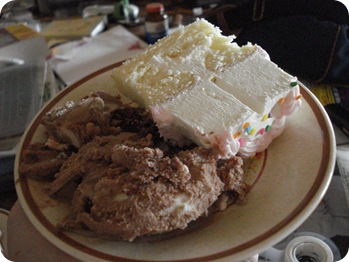 The cupcake was indeed half (whipped) icing. And indeed soooo good. I also got some moolah to put toward the DSLR I’ve been saving for! 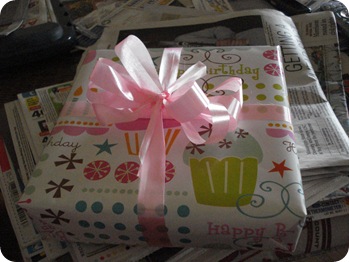 Do any of you have a Nikon DSLR? I’ve got a 35mm Nikon and am hoping I’ll be able to use my mamma jamma zoom/macro lens if I get a Nikon DSLR. Research so far has suggested I should be able to, but I also want some basic feedback on how happy people are with theirs. I think people are going to always be split on the Canon vs. Nikon debate just as they are Pepsi vs. Coke, Jay vs. Conan, and PC vs. Mac. Alls I know is I want my camera soon and am looking to buy in the next few days! We went to Best Buy to play with them yesterday afternoon and stopped by World Market where I got some bitchin pajamas I’ve been eyeing for months – they were on sale on my birthday – a sign!!

Dinner was leftovers from a meal I never documented – pan-fried turkey breast cutlets with a lemon caper sauce and steamed asparagus. 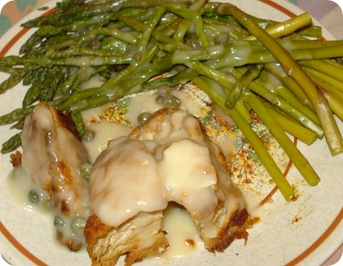 (I really need to pull out my pretty silver plate again…this 70s dinnerware is really bumming me out, man) Then we split the 2nd cupcake… 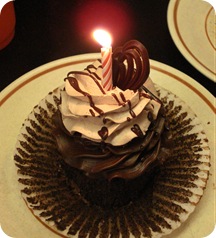 …and I woke up today with a sugar hangover. Yesterday afternoon after eating that cupcake at lunch, I was DRAGGING to the point that I could’ve laid down in the middle of the grocery store parking lot and taken a nap. I was finding myself not making sense in conversation, unable to focus, and I KNOW it was because of the sugar. It’s SO WEIRD how I’m able to identify that now, and I wonder if I used to be that way when I ate sugar fairly often, or if my body got so used to it that it didn’t affect me much.

After dinner, I got to work on a cheesecake for one of Mom’s co-workers who happens to share my birthday. I knew I wanted to make something chocolatey and hopefully caramely, but I didn’t have any direction as far as a recipe goes. I took to Twitter a few days ago to ask if anyone had a surefire one to share, and who should tweet back but Philadelphia Cream Cheese’s Twitter account! They sent me a link to their recipes page and have been so nice in Tweeting back and forth with me! I LOVE when companies have a social media presence; it makes me want to do business when companies care enough (or are at least smart enough) to talk with their customers! Anywho, the recipe I chose was this chocolate turtle cheesecake, but instead of making it in a 13x9 bar pan, I made it in a 9” springform pan and baked it for 1hr 30min, turned the oven off, and left it in there for an hour more. I haven’t tried a piece yet (Mom brought one home and froze it for us for later), but it got RAVE reviews from the birthday boy and the rest of their co-workers. Thanks, Philly, for giving me some guidance and making me look so good in front of Mom’s friends. 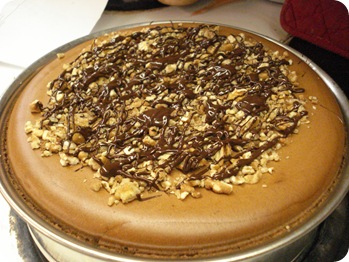 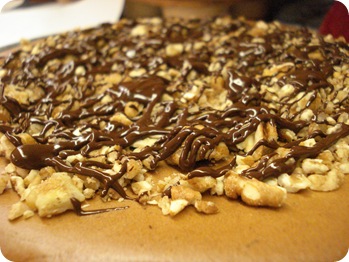 Do you have a go-to recipe you cook or bake for birthdays? Any birthday in general or specific people’s birthdays? Mom always makes Dad this AMAZING strawberry pie for his, and for my grandmother’s, Mom makes an out-of-this-world pumpkin cheesecake. I probably look forward to their birthdays more than they do, just so I can have some of that once-a-year dessert!!