Down the rabbit hole

After drafting my post this morning, I hurriedly got ready to meet a few of my best friends for lunch at Al-Amir in Irmo (Mediterranean food). We were kicking off Kaycee’s birthday festivities! 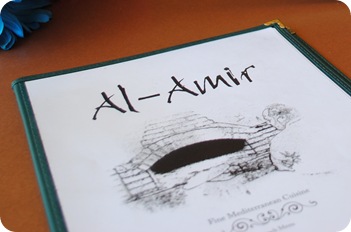 Here’s a picture of water, because Imogene makes even the most mundane beverage look awesome. 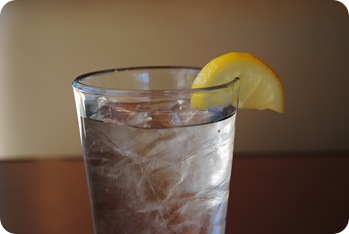 To start, I had a feta salad – romaine with cucumber, red pepper, feta cheese, a couple of kalamata olives, and a vinaigrette, I believe. 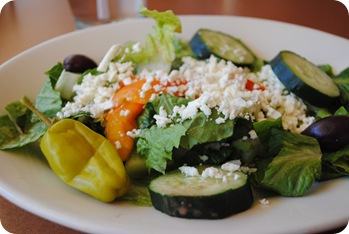 Ohhh olives, how I love you so. For my entree, I ordered chicken kabobs. 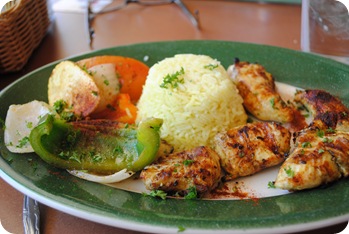 The chicken was awesome, and it had peppers, onions, and squash alongside it (I admit, I kinda picked at the rice). I did ask for some tahini after a few bites because it was a bit dry/boring…I’m cursed to rely on condiments. Then after lunch, we went for gelato on the other side of the restaurant. 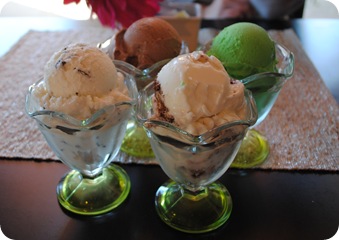 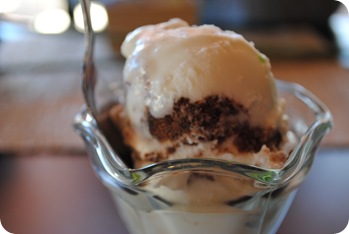 [Sigh.] Alright, I’ve gotta cut back on all this crap now that the birthday celebrations are over. I’ve had quite a few biggish indulgent foodstuffs this week, and the party’s over. After we finished up at Al-Amir, we headed over to the movie theater to see Alice in Wonderland! 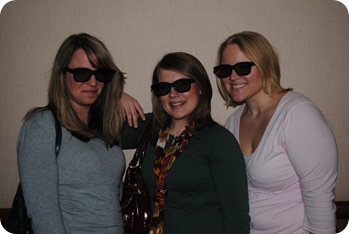 I need to cut and paste these together so we’re all included and have matching facial expressions. Naaahhhhh… 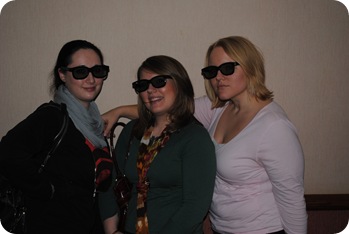 Verdict? The movie was really good! Though I can see why it got mediocre reviews – it wasn’t earthshatteringly awesome, but it was a fun cinematic experience, and I want my own copy when it comes out on DVD. Plus, it turned me onto Johnny Depp again, so he’ll be the object of my affection in the short-term future.

(PS – for those who saw it, did you think the dance just RUINED it like I did? SO DUMB.)

For dinner, I made a shrimp taco recipe I found in one of those Weight Watchers cookbooks you can buy in the grocery store checkout. Essentially you toss shrimp in a dry-rub, pan sauté them, then put them in a soft tortilla with various toppings. 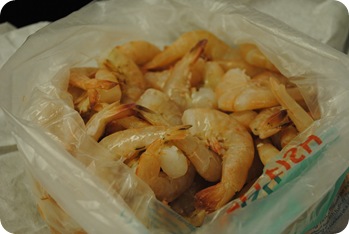 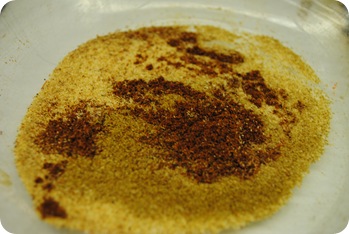 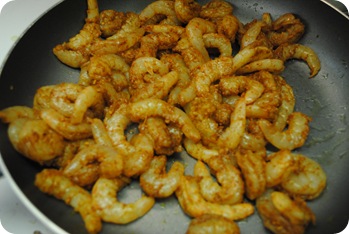 While it was cooking, I had a couple ounces of this and wasn’t too impressed: 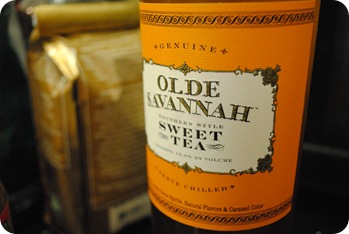 This is “sweet tea wine” that I found for cheap at World Market. It tasted like a bad malt beverage, like a wine cooler or Hard Lemonade-type drink. Soooooo sweet. I think I’ll save the rest for when I have company or visit somewhere and can bring it as a “hey, y’all gotta try this crap” sort of thing.

Instead of putting my dinner on tortillas, I made a salad out of it – lettuce with lime juice, shrimp, bell peppers, salsa verde, green Tabasco, some cheddar, and sour cream. I barely ate half and packaged up the leftovers for Mom to have for lunch tomorrow. There’s something about leftover seafood that turns my stomach; I just can’t do it. 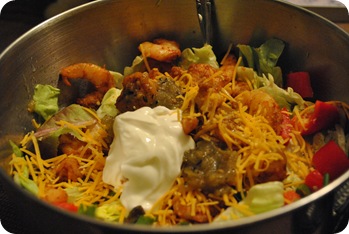 Are there any foods you’re weird about eating leftover? Any other idiosyncrasies with food? For instance, I’ll drink after someone, but not if it’s milk. I CAN'T drink milk after someone. Also, if I drink milk, it’s got to be ice-cold and alongside something (like cereal or baked goods). Also, are you addicted to condiments like I am? What are your favorite low-cal, low-fat, low-sugar condiments?