Last night I went out with my best girl friends to – guess what? – celebrate my birthday!! The plan was to go bowling and eat bar food while we were there, but at the last minute we decided to eat beforehand at Wild Wing Cafe. I decided ahead of time that I would drink up to two beers (depending on how I felt after #1) and have one of my favorite guilty pleasure meals – the Buffarella buffalo chicken wrap! 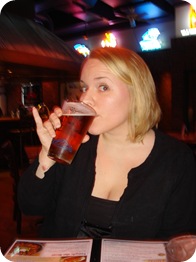 Beer #1 was a Yuengling (so Kevin could live vicariously through me!). (Hey, Carol…is that #boobiewed enough for you?). The gals (my friends, not my boobs) and I shared some not-awesome spinach dip while we waited for our food (but we were so hungry we ended up eating a bunch of it anyway) 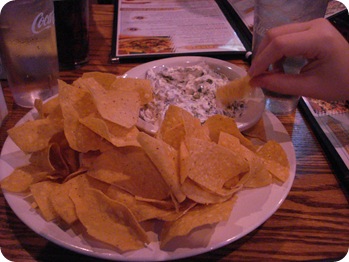 And here’s my glorious Buffarella (I usually get it with fries, but I went with the celery instead, saving a billion calories and a couple of years on my life) 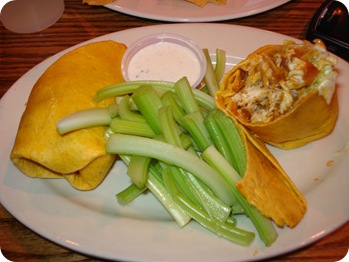 It’s soooo spicy, you have to chug your beer to put out the flames engulfing your tongue, which is why I ordered beer #2, a Blue Moon (unpictured due in part to the effects of Beer #1). Also, Catherine ordered a liquor drink for the table that I had some of…it was pretty weak, but I’m sure it helped my loopiness.

We left Wild Wing and drove to the bowling alley (we had a DD!) where we discovered it was league night. Damn. I knew I should’ve called ahead. It was soooo cold and rainy that instead of standing around and planning from there, we all jumped in our cars and headed to a movie theater down the road where we realized we were just in time for Valentine’s Day. It was just what I expected it’d be – fluffy, a little silly, a little sappy…just what I needed during girls’ night. Too bad we weren’t the only ones in the theater, because we wanted to be rowdy!! I got a teensy $1 popcorn and Coke Zero for the movie but didn’t eat much popcorn on account of the Buffarella. I didn’t need the popcorn, but I wanted it. Stupid. I ended up bringing 2/3 of the bag home to Mom, though, because we’re dorky like that.

The cast of characters: 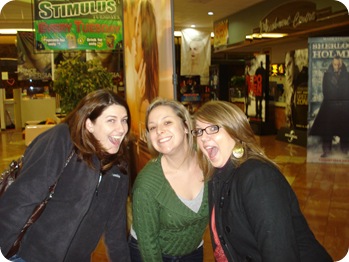 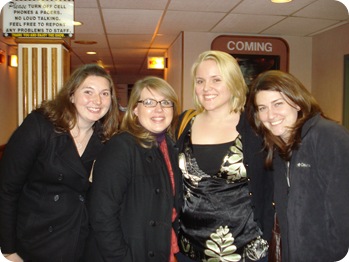 I was so surprised that shirt fit (and was even kind of loose!!)…I haven’t been able to wear it in YEARS, and I unearthed a pair of jeans at the last minute that were a little snug but fab-looking. The last time I remember wearing that shirt was either in 2005 or 2006, and it was tiiiiight then: 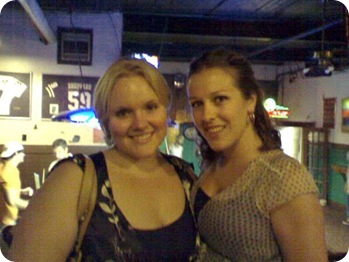 Remind me never to cut my hair like that again, please. Ok, back to last night… 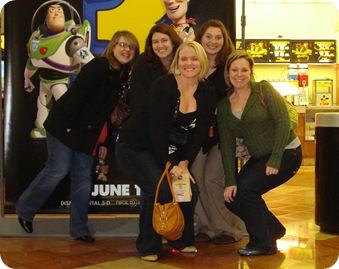 Throughout the movie, we kept getting texts from husbands/fiancees/moms that it was snowing in the area, but we didn’t think too much of it…until we walked outside and saw THIS: 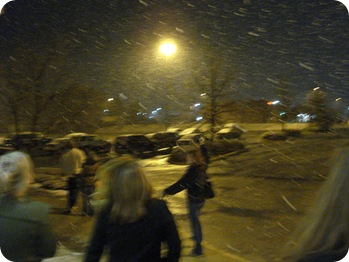 GIANT CLUMPY SNOW!!! AND IT WAS STICKING!!! 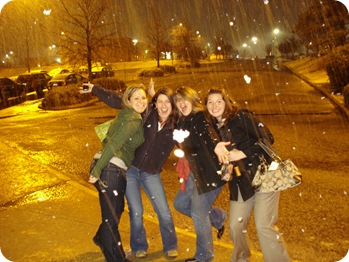 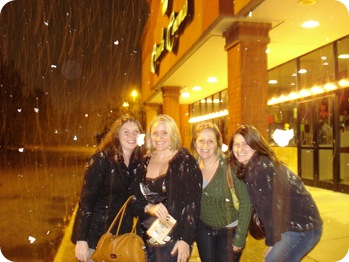 I was SO giddy about the snow! I think all of us were!!! After getting dropped off at my car and brushing the snow off my windows, I drove home (cautiously slow) and popped A Christmas Story into the DVD player. Last night was one of those nights that makes your cheeks hurt from smiling so hard.

For those of you who live where it only snows a couple of times a year, do you have any snow traditions? I’ve always saved A Christmas Story for Christmas Eve, but watching it last night was pretty darned sweet!