This was just supposed to be a shallow “what happened today” post, but then it got heavy at the end.  My apologies/you’re welcome.

Last night I went to my first-ever Pilates class!  At one point, I was super-intimidated because I was contracting my abs so hard, I started to shake; later on in the class, our drill sergeant instructor said, “if you’re experiencing the quiver, you’re doing it right!”  So I went right back to working hard and quivering harder.  There were a lot of moves I could only do a few reps of before resting, and I know I’ll get stronger with time, but it was frustrating to not be able to keep up 100%.  All in all, I’d like to go back next week; even though she was tough (and didn’t explain things very well to the newbies), this class is exactly what I need for my weak core.  I haven’t been able to do anything today without my abs burning…a delicious sensation indeed!

Speaking of aching, I’m sick.  During Pilates, I got a bad headache and assumed it was due to poor breathing, blood rushing to/from my head, or electrolyte imbalance (I chugged water yesterday like it was going out of style).  However, I got home and my headache persisted, only to be joined soon after by a terrible sore throat.  Sleep didn’t help, and it’s gotten worse today…everything aches, my throat is sore and swollen, and I’ve had a fever.  Whine, bitch, moan.

For lunch I had one of my buffalo chicken salads with a crap-ton of hot sauce to try to numb my throat.  I was too bleh to lug the camera to the kitchen, so it’s off the record.  For dinner, I was craving French Onion Soup (totally out of character for me, right?) 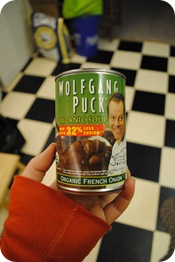 It was comparatively low in sodium when stacked against the other brands, but still something I probably should’ve shied away from the day before I weigh in (more on that in a second).  I promptly unhealthified it by adding sandwich thins “croutons” and some parmesan cheese.  I’m so in love with this new mug I got over the weekend! 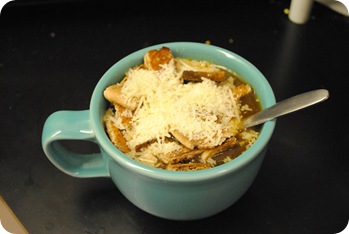 I wanted something cold for my throat, but those cheap old sugar free popsicles make me cringe…biting into them is like nails on a chalkboard.  Mom found these at the store for me: 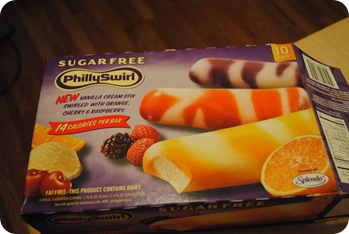 Philly Swirl Splenda-sweetened popsicle/creamsicle thingies - 14 calories apiece, and they’re soft-ish and small-ish and perfect for what I wanted.  I hope this crud goes away soon…it’s really making me bitchy and unproductive, two personality traits I really don’t like in myself.

So the weigh-in…it’s happening tomorrow (Wednesday), and if I could cancel, I would.  However, I know that I need the most support when I want to cut and run, so I’m going.  According to my home scale, I’ve gained a couple of pounds over the past week, which is totally inexcusable.  I’m really starting to get beyond mad at myself for all this “putting my foot down and then giving in to temptation” crap, and that starts the self-loathing/self-soothing/self-guilt cycle anew.  It’s disheartening that I’m going through this program, which isn’t free, and I’m not putting into it what I want to get out of it.  I’m wasting yet another opportunity like I have so many times in the past.  It’s not going to happen TO me, I have to MAKE it happen.  And before anyone says “quit being so hard on yourself,” please take into consideration that I let myself get away with too much (wow, the schizophrenia that’s unfolding here is all kinds of unattractive).  I’m the one who chose to drink all that wine this weekend.  I’m the one who opted to eat all that bread this weekend.  I’m the one who snuck chocolate chips today and didn’t plan on telling anyone.  I’m the one who makes all my decisions, and I’m the one to blame.  So how can I go from being mad at myself for screwing up to wanting to succeed and taking the steps to actually make it happen?

And now that I’ve gotten all that out, I’m thinking about it semi-rationally.  People who go to Weight Watchers have weeks where they don’t lose at all or might even gain.  I’ve been losing (almost) steadily for several months and just within the past month and a half have slowed to a near stop.  OK, here comes the frustration again… Yeah, yeah, maybe I need to cut myself a break, but we’ve all been saying that this whole time.  When do I officially need to snap out of it?

Can anyone identify with what I’m saying?  Better yet, can anyone offer advice about going from Point A (being mad and blaming myself for screwing up) to Point B (wanting to succeed enough to make good choices, being kind to myself in order to ensure success)?