Hey, y’all!  I hope everyone had a fantastic weekend!  I spent mine in the glorious Upstate for a beer festival on Saturday and a blogger meetup on Sunday!  I had a great time at both, but I fear my experience at the meetup was marred a tad by a hangover.  Awesome job, Kat.

On Saturday I woke up bright and early to do C25K week 2 day 1.  I was so proud of myself for getting out there and doing it, even though I was half asleep and it was wicked cold outside!  I got home, showered, packed for Greenville, and had a friggin’ awesome (though partially deconstructed) omelette with onions, peppers, ham, and cheese. 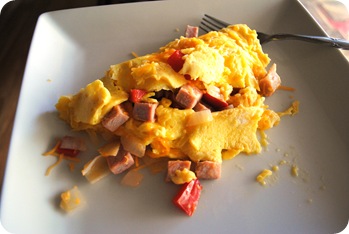 So after a 2-ish hour drive, I got to my friend Mark’s house (which I’m sad I didn’t take any pictures of!), dropped off my stuff, and we headed to the Bi-Lo Center for the inaugural Top of the Hops beer festival! 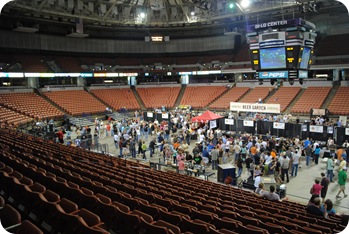 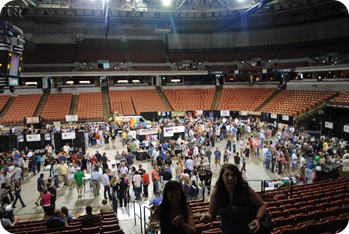 We got these precious little beer mugs along with a checklist and golf pencil and hit the tables. 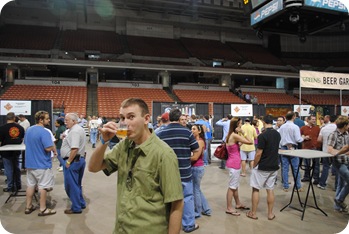 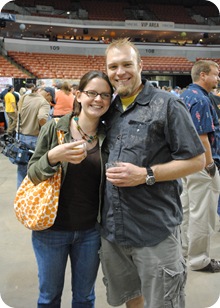 There was also a tent outside that probably contained as many breweries as the inside, but by the time we went out there, I was too tipsy overcome with excitement to take a photo.  Halfway through the tent, though, I got a craving. 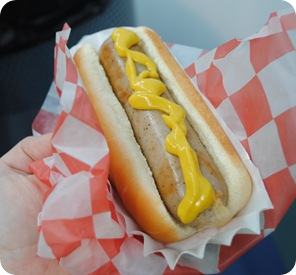 There’s something about copious amounts of beer that just screams BRAAAATWUUUURST.  It was truly amazing.  After we finished up at the Bi-Lo Center and made our way to the next stop, things got awkward. 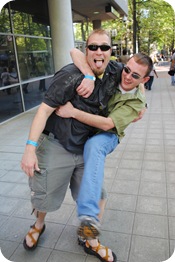 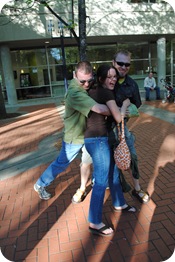 I guess tasting 2oz of beer at a time for 4 hours straight just makes Mark people want to molest other people each other.

Our next stop was dinner at Mark’s coworkers’ house.  Here’s where I should’ve said, “Kat, you had your splurge.  The beer festival was enough…switch to water,” but my “rational” switch was turned to OFF.  Bud Light might be closer to water than the stuff I had been drinking earlier, but it’s still not water. 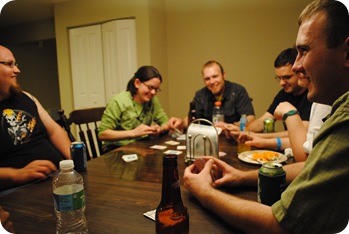 Beer + deck of cards = pure evil.  The unhealthiness didn’t end there, though.  Ohhh no.  We went to a place called “The Irish Pub” which had nothing Irish or pub-like about it. (Any “Coffee Talk” fans?  The Irish Pub is neither Irish nor a pub.  Discuss.) 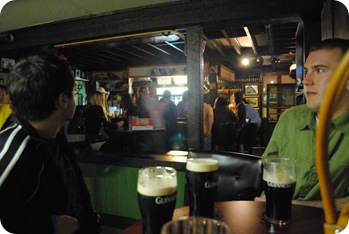 Save for Guinness, I suppose.  Me?  I had cider.  Not water, but cider.  I had one while we played cornhole in the awesome back yard area, ordered a second, and ONLY THEN did I realize, “hmm…I’ve had enough.”  I started chugging water the moment we got back to Mark’s, but it didn’t save me.  I had a hangover on Sunday.  Ugggghhhhh.  I don’t remember the last time I had one, but I sure didn’t miss that feeling.  It was bad enough that I had one, but even worse because I had scheduled a SC Upstate blogger meetup for Sunday brunch!  Argh, Kat!!!

We all got to The Bohemian Cafe around 11am on Sunday morning (kicking myself because I forgot to take a picture of the outside). 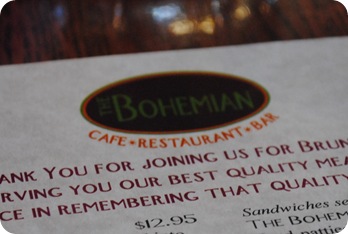 In attendance were Lily (who I knew from college), Carla, Katie, Christina, Christina’s sister Veronica, me, and Mark – the only male and the only non-blogger; poor Mark.  The first thing I did was order a Bloody Mary from their build-your-own Bloody Mary bar; I’ve never tried the “hair of the dog” trick for a hangover before, and I don’t know if it was the small amount of vodka or the insane amount of horseradish in their house mix, but it actually made me feel better! 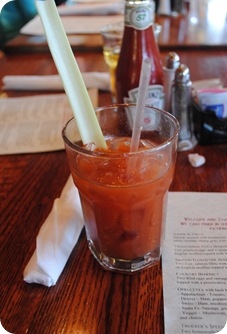 I ended up ordering the shrimp and grits… 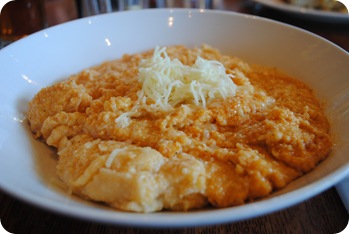 …and I really wish I hadn’t.  It was alright, but it wasn’t what I was craving.  Three bites later and I felt worse.  Bleeech.  I wish I hadn’t felt so icky, because I think I would’ve been more engaged in the conversation if I had felt better.  I’ll make up for it at the next one, which I still say should happen in Charleston! 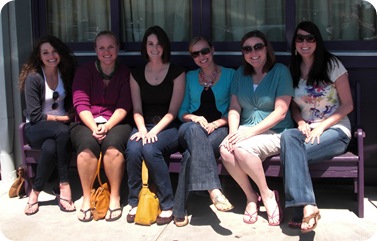 (I stole borrowed Katie’s group shot because I’m wearing sunglasses in mine and look like a bespectacled sausage.)  After I left the gals and bid adieu to Mark, I traveled to Mecca for the first time… 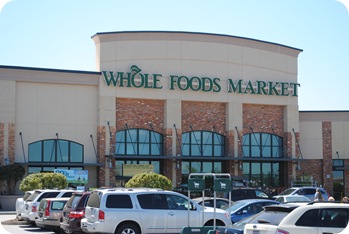 TOTAL sensory overload at Whole Foods!  I was so overwhelmed!  I brought a cooler and ice packs with me just in case I got something perishable, but there was too much to see and too many people everywhere that I only ended up with a couple of things.  I think I’m glad there’s not one in the Midlands – I’d waste waaaay too much time and money there, I’m sure!  I got Mom some “raspberry latte” trail mix, a few cookies that I had half of in the car (it was the only thing that sounded good to my poor abused tummy), and a blue cheese mustard sauce I’m looking forward to trying.

I had a great weekend in the Upstate, but I’m still kicking myself for overdoing it with the beer.  I know I just got carried away with myself, but I should’ve reigned it in better, especially because I was doing so well with my eating last week!  I weigh in at the doc’s on Wednesday, so I’m trying to be super-diligent before then.  Let’s all cross our fingers that I can bounce back quickly!