I’ve heard several people mention “blogger malaise” within the past couple of weeks, and at first I was all, “wow, sucks for them,” and now I’m willing to join a support group.  I don’t know what it is lately, but I’ve been inspiration-less and boring and thus avoiding blogging.  Meh.  This REALLY sucks because there are now 102 of you subscribers!!  THANK YOU!! I think I have a celebratory giveaway in the works; I’m waiting to hear back from someone about it!

I wrote a mediocre, text-heavy post for Hollaback Health on Friday, “Succeeding Takes Balls,” and while it was a topic that kept buzzing around in my mind, it was a bit of a Debbie Downer-esque post for Hollaback.  Also, I’ve spent the last 4 days working out in the yard.  Thursday – Sunday, I spent waaaaay too many hours busting my ass (and pulling my muscles in a bad way), and I didn’t even take before and after photos!  WTF???  Oh, and when you pull muscles in your back and legs, it’s a bad idea to do intensive yoga.  I thought stretching would ease the discomfort, but it made it 800% worse.  Ouch.  So between being busy, being hurt, and being a Debbie Downer, I’ve been MIA.  Blech.

At least I did something blog-worthy on Saturday – I went to a wedding! 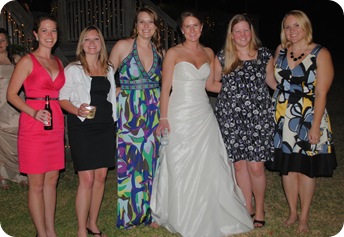 I grew up with a pretty tight-knit group of people, so it's always fun when one of us gets married!

I started out with a pinot grigio… 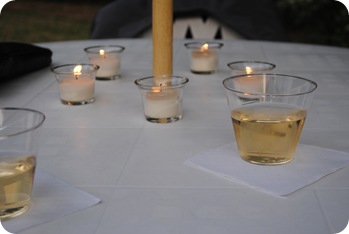 …before hitting the buffet line ONCE. 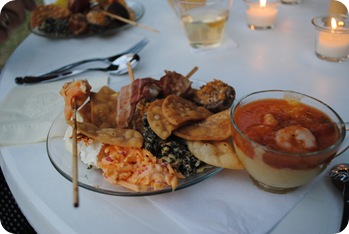 Shrimp & grits, dips & crackers, stuffed mushrooms, and chicken kebabs.  Perfect!  As the night wore on, I had a couple of light beers and a slice of awesome wedding cake.  I got a good picture of Mom and me… 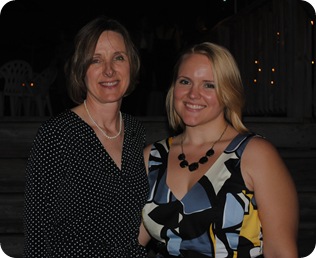 …and I think we look better than we did at my cousin’s wedding 13 months ago! 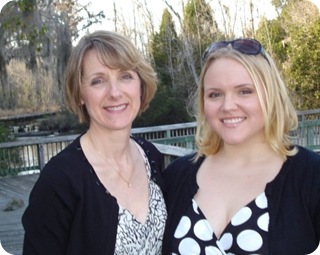 And I had even Photoshopped this one to make my face look thinner; I would never put pictures of myself on Facebook without Photoshopping them first.  Why?  People knew how fat I was when they were taken.

In other news, I started C25K week 3 today and it felt great!  I even felt so great about it that I did a crazy-fast sprint during my 5-minute cooldown; I saw a sunbeam far ahead of me on the path and decided to run for it.  My legs felt crazy while I did it, but my lungs and heart were happy afterward.

When I first re-started C25K after having to stop for a couple of months, I thought it’d be more difficult to keep pressing on since I had done it already.  When I did it the first time in the fall, each week was a new milestone that I had never reached before.  This time, I was/am worried that I’d be less likely to push myself, but I’m feeling better about it now.  Plus, I’m trying to stretch every chance I get, so hopefully shin splints will stay the eff away this time.

Do you find yourself more motivated to come back after an injury?  Is it harder to get back where you were before?  Is there an element of fear of re-injury?