Hey guys!  I hope everyone had a great weekend!  Mine has been busy and productive, but fun overall!  There are a ton of pictures ahead!

On Friday, Mom and I ran some errands but made a couple of fun stops along the way.  First off, we headed to Zoë’s Kitchen for lunch…I’ve not been able to get their Greek salad out of my head since I had it a few weeks ago… 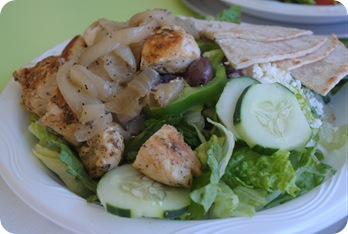 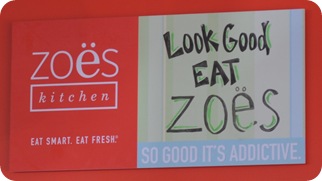 After lunch and a few more stops, we went somewhere neither of us had ever been before – Cupcake on Lincoln Street. 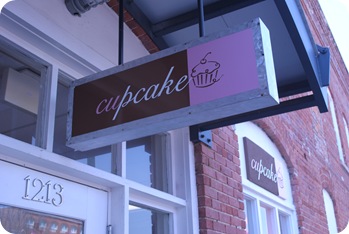 We walked out with two flavors that we split – peaches and cream, which had chunks of real peaches and cinnamon streusel topping along with an amazing peach frosting… 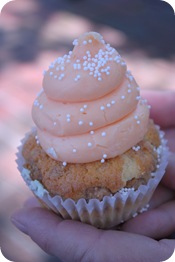 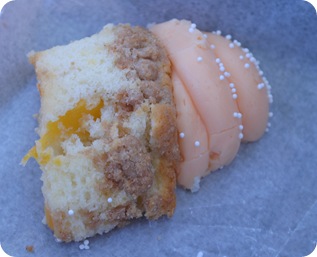 …and a mint chocolate chip cupcake… 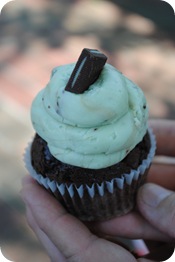 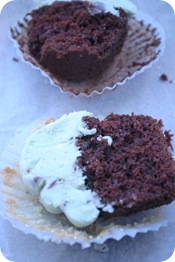 They were seriously the best cupcakes I’ve ever had.  Oh. My. God.  I definitely worked off those calories on Saturday, though…

On Saturday, Mom and I worked outside allll day, and I got sunburn and sore muscles to show for it.  We made lots of progress on different areas around the house, one of which I’m really excited about – we started clearing out an area we used to garden in!  I hope we’ll be able to clear it out and tend to it properly, because it’ll be awesome to grow our own veggies again!  I even harvested some earthworms for composting; I’m interested to see how this will all play out!

Speaking of creepy crawlies, I made a little friend: 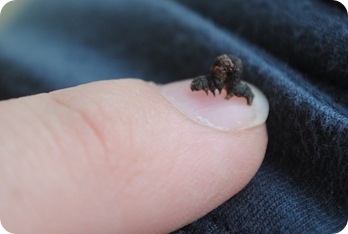 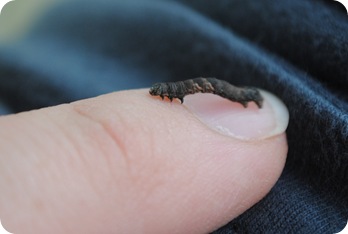 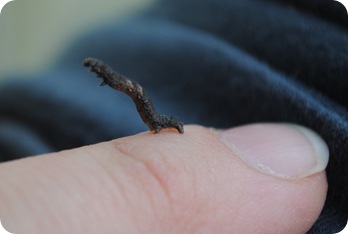 He was so cute!  Later that evening, I got ready for my friend Lofton’s birthday party.  As I mentioned (ad nauseum) on Twitter, it was a Jersey-Shore themed party.  Even though I’ve never seen the show, I went all out. 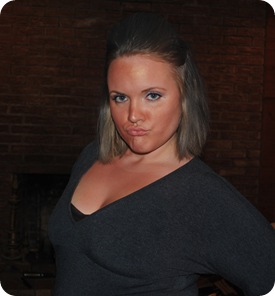 I used an entire bottle of black hair spray dye on my hair.  I totally could’ve used a second; my blonde hair peeking through made it look kinda gray.  Oh, and the bronzer – if it was uneven and splotchy, I just piled on more.  I think the end result was pretty effectively tacky. However, the birthday girl totally wins the prize for Most Jerseylicious. 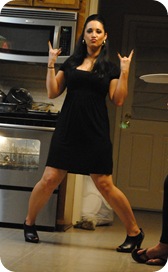 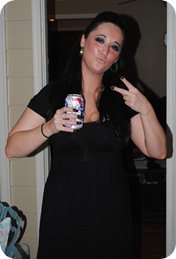 She definitely had Ed Hardy nails and studded booties. 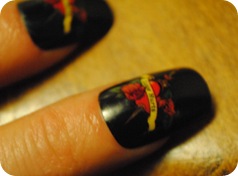 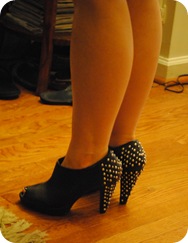 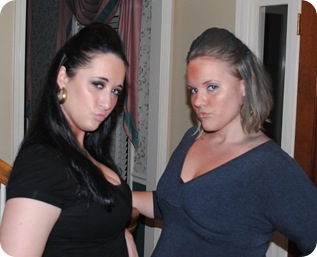 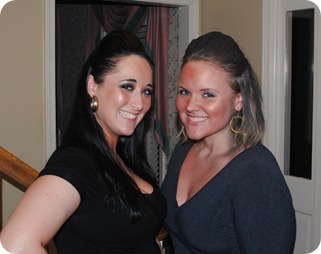 I look like the faded denim version of her.  Oh, and get this – that spray color rubs off on everything.  My sunburn coupled with flaky black hair spray made me look like I had been beaten…gross. 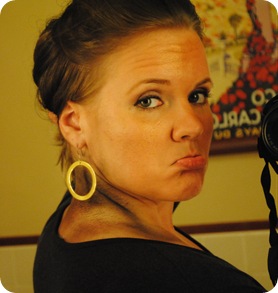 Incidentally, I’m starting up a Flock of Seagulls cover band if any of y’all are interested in jamming with me. 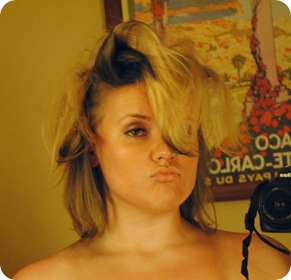 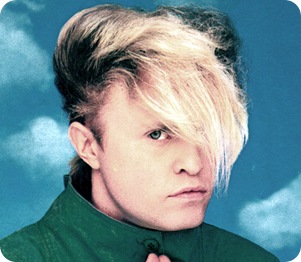 I swear, I took that self-portrait without knowing the image on the right even existed – I just thought they had funny haircuts; I didn’t know he had the black/blonde thing going on!  I googled “flock of seagulls” and thought someone had already posted a picture of me on teh interwebs.

Mom and I woke up bright and early Sunday morning to attend our church’s sunrise service at a member’s house.  Their property is amazing – they’ve got this flat peninsula-type yard that is a perfect area for huge groups of people. 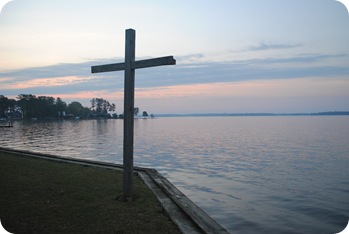 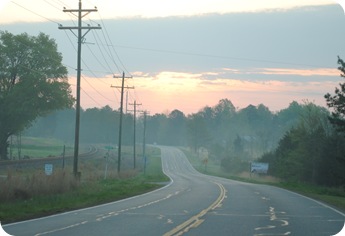 I took this one on the ride back; see that “fog?”  It’s not fog – it’s PINE POLLEN.  I need to take some better pictures of it tomorrow…it’s like plague-caliber.  It’s on EVERYTHING and it’s invading my lungs and skull.  Ick.

We went to Lizard’s Thicket for breakfast afterward where I got a Western Omelette that had ham, onions, green peppers, and cheese in it.  It came with potatoes and a biscuit, and yeah…I ate them. 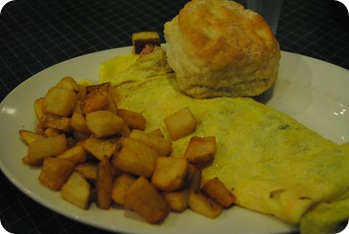 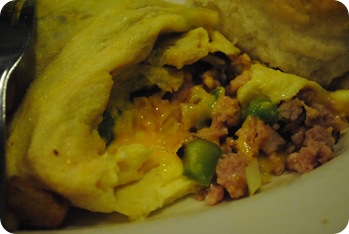 Y’all check out this gastronomic wonder: 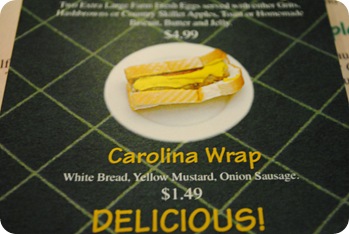 After a 3-hour nap (I got 4 hours last night), I headed out to the marina down the street to see Catherine’s fiancée's band (they’re so good!). 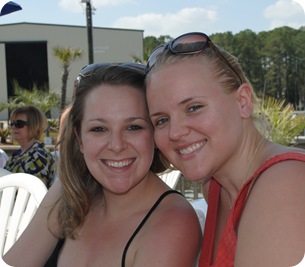 So glad all that “black and tan” washed off!

Oh wait, one more thing - I still get an Easter basket – do you?? 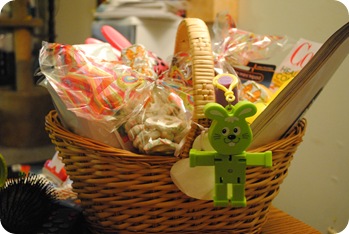 A few edibles, some money, a magazine, some coffee, some cute jewelry, and Alice in Wonderland for Wii!  Yep, I’m 12. 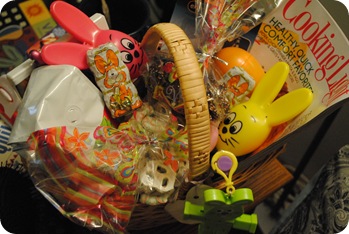