I didn’t mean for this post to skip around so much, but that’s just how it fleshed out.  My B.  Hopefully the haphazard headers will help (alliteration FTW!)  Also, I posted about Finding your Blogging Voice this morning on Hollaback Health, so check it out, si’l vous plait!

Indeed I told the truth in my last post; Lofton and I did eat lunch at Chili’s to celebrate Seis de Mayo (while we were out shopping for Mother’s Day – we’re not totally selfish), and we did indeed imbibe tequila-based drinks. Though my drink wasn’t a margarita; it was a paloma. 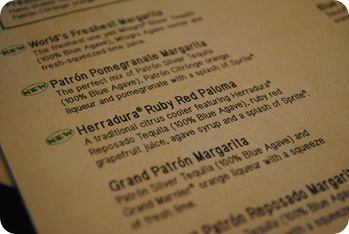 I had never heard of such a thing, but it sounded perfect! 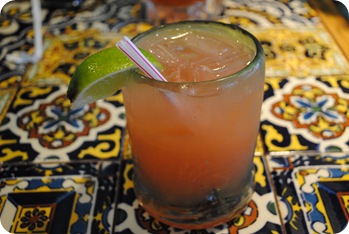 It was nice and refreshing – not cloyingly sweet like margaritas often are. 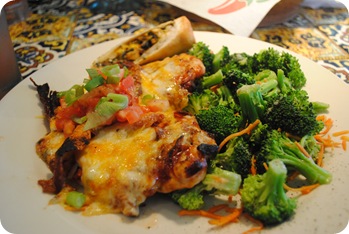 I had the Monterey Chicken for my meal but with double broccoli instead of mashed potatoes.  And one of Lofton’s Southwestern Egg Rolls.  Wow, I just looked up the calorie information for that chicken and wish I could take it all back.

Thursdays are our produce co-op delivery days, and check out this beautiful bounty! 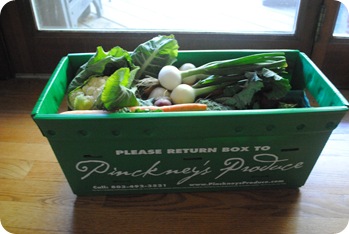 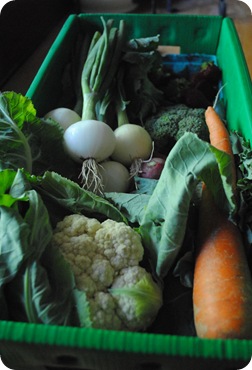 It’s kind of like Iron Chef – you’re not 100% sure what you’re going to get until it’s dropped off, and then you’ve got to figure out what to do with it.  I’m eyeing some recipes for the greens I’ve never tried…stay tuned to see what I do with them!

For dinner last night, I took some inspiration from Chef John for my dishes.  First off, I cooked some canned tomatoes and artichoke hearts on the stove along with basil from my garden, some EVOO, a splash of balsamic vinegar, and a splash of lemon juice. 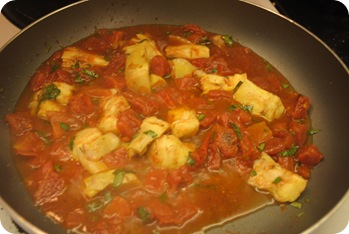 I roasted a spaghetti squash and a head of garlic (my first time roasting garlic – it made the house smell like an Italian restaurant!)… 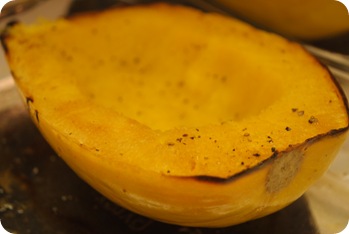 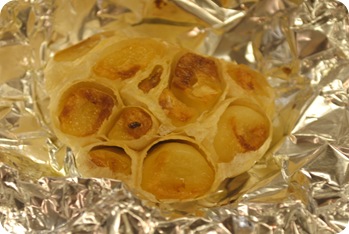 I then combined all the garlic cloves with a warmed roasted red pepper (from a jar) and some warm chicken stock in a blender to make (my version of) the red pepper sauce we had at Let’s Cook the other night.  I topped the spaghetti squash with the red pepper sauce, topped some leftover chicken with the tomato/artichoke mixture, and sprinkled cheese on the whole ensemble. 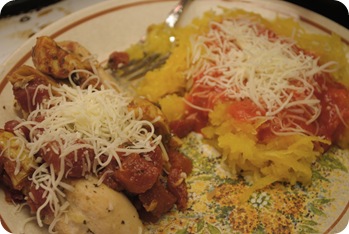 Not bad for an “inspired by” meal!

Have you ever made a restaurant-inspired meal before? A direct copy or merely “kinda similar?”

I was about to publish this post but forgot to include a C25K update!!  I completed Day 3 of Week 5 today, a.k.a., The First Long Run.  It was a sustained 20-minute run, and I had to stop after 13 minutes for a ~1 minute break before finishing the last 7 minutes.  I wasn’t disappointed that I had to stop, because seriously, you’re going from the longest interval of 8 minutes at a time on W5D2 to a full 20 minutes, non-stop on W5D3.  I wasn’t disappointed at all.  When I got back to my car, I drove the route and learned I had stopped to take a break at EXACTLY the 1-mile mark!  I ran an entire mile before I had to stop!  Everyone had to start somewhere, so I’m proud of what I did.  In all, I ran 1.4 miles today; The Type A in me is a teensy bit disappointed it wasn’t an even 1.5, but hey, I’ll take it.

My performance was also probably thrown off this morning because I changed my route.  The other day, a fellow park-goer stopped me and described a man who had attempted a weird conversation with her.  He didn’t harm her in any way, but it left her feeling anxious about walking alone.  As I started to the trailhead where I usually run, I saw someone who kinda fit the description she gave me, so I decided to run on the main road where there would be lots of cars and rangers…and sun.  I wasn’t used to running in the sun, and it definitely takes its toll on you!

I keep saying I picked the worst time to pick up C25K again because I should be (fingers crossed, people) finishing the program right when it really starts getting hot and humid.  I get dizzy even walking on a treadmill, so I’ll have to get up at the ass-crack of dawn to run outside before it gets hellacious if I want to keep up my running stamina this summer.  I have noticed that there are a few candle-lit night races around here during the summer to avoid the heat – has anyone ever run a candlelight race before?

My next step is deciding where to go with the program; I think I’ll move on to Week 6 because the first two days have intervals, then maybe start repeating from there if I really have trouble with the 25-minute run.  Any opinions on how to proceed? I think my limiting factor is more my lungs than legs, but my overall endurance as a package needs some oomph.