One of the best meals I’ve had in awhile was consumed on Tuesday night: 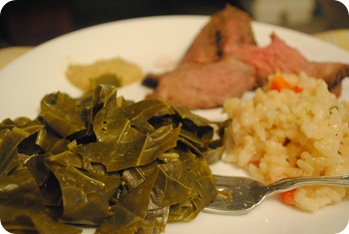 Collards, marinated roast, and a risotto I whipped up for Mom and Dad but had to try myself (onions, red peppers, garlic, chicken stock, a splash of lemon juice, oregano and basil chiffonade, salt, pepper, a dash of nutmeg, and a handful of parmesan cheese).  With the roast, I had a mixture of Stonewall Kitchen’s Blue Cheese Herb Mustard (found at Whole Foods, Earth Fare, and the like) and horseradish, and it was nothing short of amazing.

I lightened my load yesterday (note: “before” shot was taken in a strapless dress, not birthday suit), going from scrag… 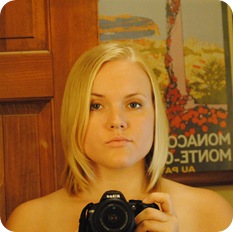 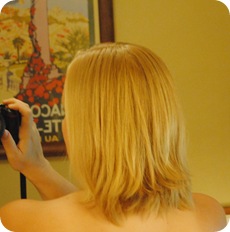 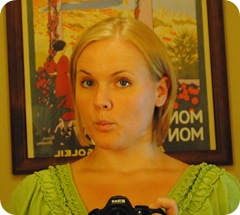 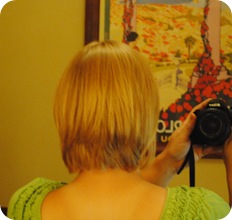 Though short hair is a bitch when you’re sweating at the gym.  It was so easy to put my hair up in a high ponytail before, and now all I can manage are two little pigtails that make sweat that much more obvious.  My salon had a giant box-o-hair they were sending to the Gulf to make oil sopper-uppers, so in a teensy passive way, I did something to help clean up the oil spill!

On Tuesday I tried running again and only made it 11 minutes before I had to stop stopped for a break.  However, the place at which I stopped is kind of a landmark on my path, so my reason for stopping was probably more mental than anything else.  Also, I had had breakfast a few hours prior and then ate a protein/energy/snack/whatever bar on the way to the park – HUGE mistake.  I got such a bad side stitch, and I’m assuming it was from the bar sitting in my stomach.  So today I’m setting out without having eaten RIGHT beforehand, and I’m going to try to do 15 minutes before I take a break.  Wish me luck.

The podcasts that have gotten me through my runs lately?  Dough Benson’s “I Love Movies” (links open in iTunes) and Chris Hardwick’s “The Nerdist” (I have a ginormous crush on him now).  Beware: profanity (and lots of laughs!) ahoy!

What’s your favorite thing to listen to when you work out?  “Shake ya ass” music?  Podcasts?  Audiobooks?

Editing to add that I did Zumba last night in a sleeveless shirt for the first time ever!  Not sure I’ll do it again, but that was a huge step for me.  Yeah, I probably won’t do it again.  But I did it.

About me Cto5K Exercise Gym Zumba