Last night, I did one of the COOLEST things ever.  I attended a birthday celebration for Lee, Lofton’s mom, at Let’s Cook Culinary Studio in Columbia. 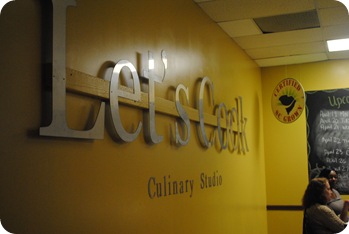 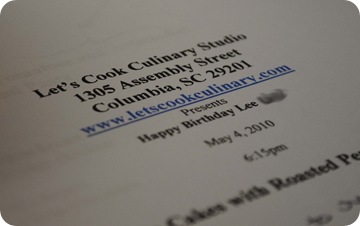 We all brought wine (the studio doesn’t have a liquor license, so you BYOB) and mingled for a bit while we waited for everyone to arrive. 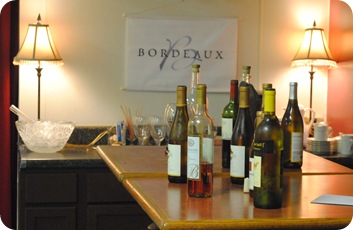 They display a schedule of their classes and events on a huge blackboard, and all the ladies were talking about which classes they’d love to participate in (the calendar still showed April events, but they generally have a set schedule, available on their website). 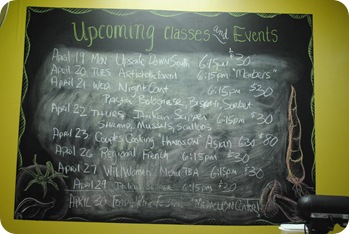 We all took our seats at the table/bar where Chef John Militello prepared the evening’s dishes and taught us a thing or two about cooking! 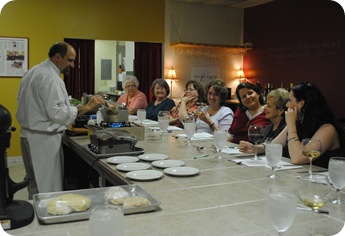 The kitchen has the coolest setup; while we were mingling, The Food Network played on the television (apropos, no?), but when Chef John began working, he switched on an overhead camera so we could see all the action. 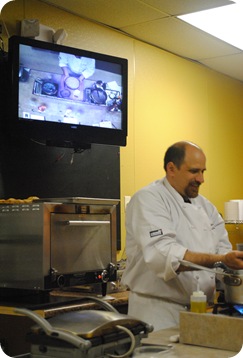 The first thing on the menu was a Lemon Herb Risotto Cake with Roasted Pepper Sauce. 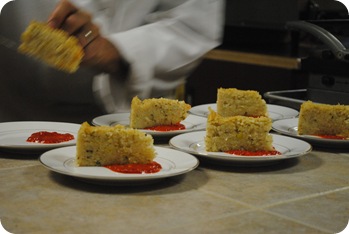 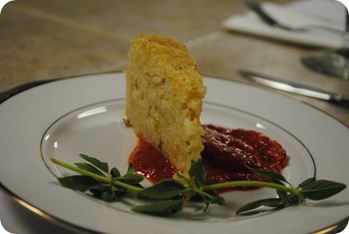 Ohhh man…this was amazing!  I’ve been CRAVING risotto somethin’ fierce lately, and I’ve never had it in a form like that!  Who knew a springform pan could be used for something besides cheesecake?  And that roasted pepper sauce – I can’t believe how simple and delicious it is!  It’s made of roasted red peppers, garlic, and chicken stock, all pureed together.  Now THAT’S something tasty and guilt-free I’ll definitely be using soon!

Next on the menu was an Arugula Salad with Parmesan, Apples, Cranberries, and Grapes. 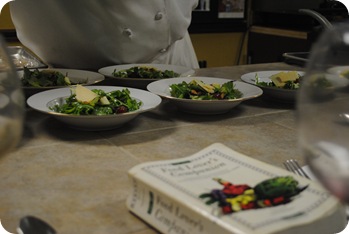 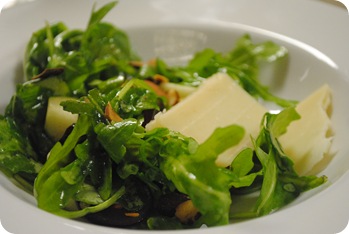 It was so light and flavorful; the pepperiness of the arugula + the salty smokiness of the parmesan + the sweetness of the fruit was a total mouthgasm experience.

Alongside the salad, Chef John served an awesome foccacia-like bread; I think he said it was made from simple pizza dough bought at Publix, but he sprinkled herbs and sesame seeds (and olive oil?) on top.  Why didn’t I think of that?  My pizza dough has only ever served to hold up my pizza toppings…I need to think outside the box more! 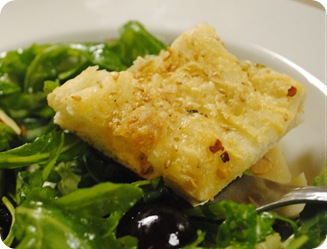 The main course was Chicken Vera with Tomatoes and Artichokes, Fresh Asparagus, and Pasta.  While the chicken, tomatoes, artichokes, and asparagus were all cooking… 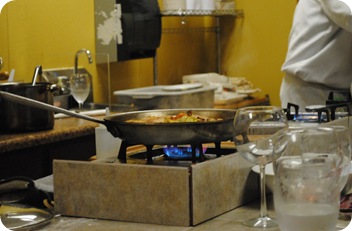 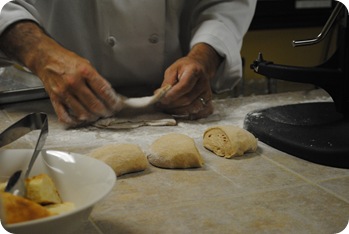 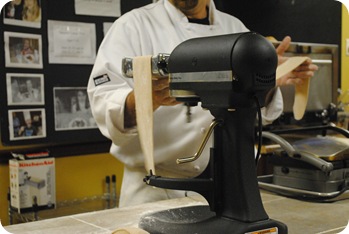 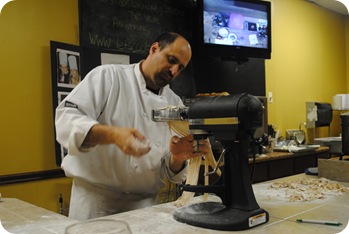 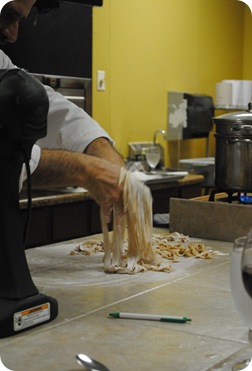 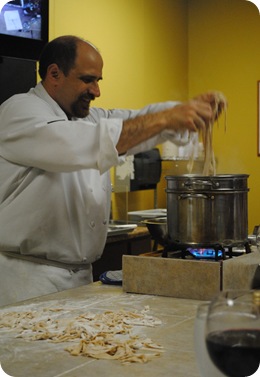 The finished product was nothing short of beautiful and delicious: 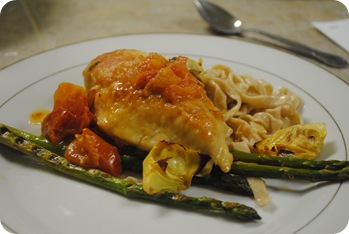 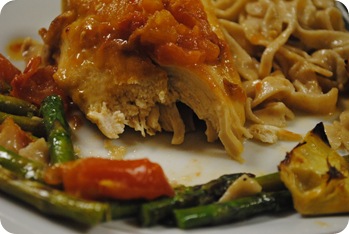 As soon as we started on the main course, Chef John began working on dessert, Zabaione – an egg custard that required liberal use of the whisk. 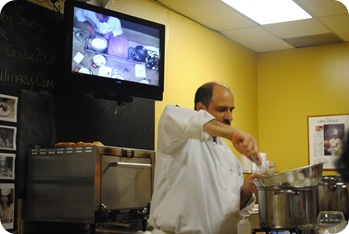 It was served with chocolate-dipped biscotti… 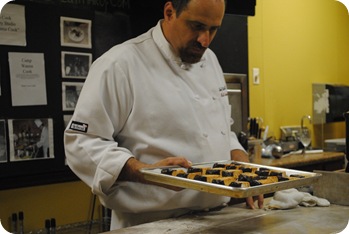 …and fresh strawberries, and it was the perfect ending to a fabulous meal! 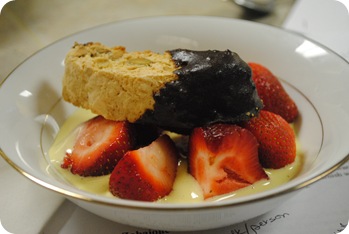 I geeked out the entire time I was there, saying “I can’t wait to blog about this!!”  I can’t believe there’s something like this in Columbia!  In addition to offering different themed classes (Southern, French, Portuguese, and Italian to name a few), Let’s Cook Culinary Studio also welcomes showers, parties (like ours!), and wedding rehearsal dinners (wouldn’t that be the coolest rehearsal dinner ever??), and they offer in-home personal chef services for special events.  In addition, they offer summer camp cooking classes for kids, which is so important these days! 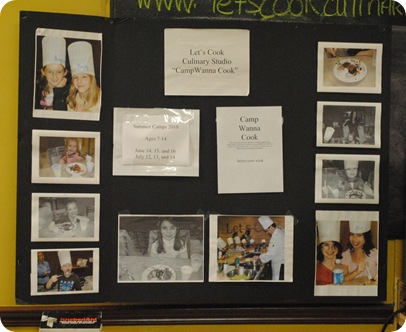 I had such a wonderful time with my friends, and Chef John was so great to answer questions and tell us about what was going on each step of the way.  We all agreed we’d love to come back for another session (“Wild Women” night, perhaps?), and I hope more people discover Let’s Cook Culinary Studio – it was such a neat experience!

Have you ever experienced a cooking demonstration by a chef? Either at a private party or a larger public event?  Have you ever taken a cooking class?