I love being a part of a CSA!  As you all know, I’m trying lots of things I normally wouldn’t – this time it was swiss chard! 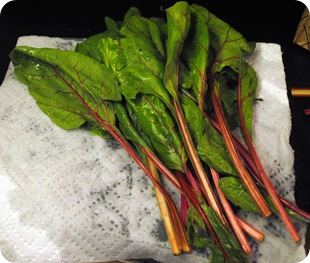 Not too long ago, I saw an episode of Martha Stewart dedicated to greens, and I bookmarked the Citrus Chard with Raisins recipe to try when I got my hands on some chard.  After washing it several times, I removed the ribs, chopped it up, and cooked it in boiling water with some salt for a minute or two before immersing in an ice bath. 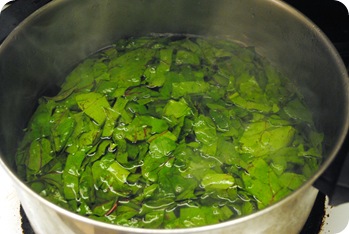 Then I transferred the chard to a pan I had sautéed some garlic in, added dried cranberries (substituted for raisins), then finished off with orange juice. 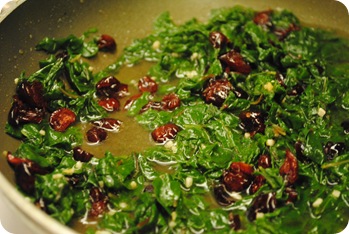 I didn’t follow the timing on the recipe exactly; everything was supposed to happen really fast – a minute here, two minutes there – but I added too much orange juice and let it simmer awhile in an attempt to reduce it.  The end result was still kinda “greeny” but nowhere near as bitter as my turnip greens were.

I had been craving salmon, so I marinated a couple of pieces in lime juice, cilantro, and garlic for a few hours before baking them and topping with Bronco Bob’s Roasted Mango Chipotle Sauce I got from World Market (the Greek zucchini also made a reappearance!). 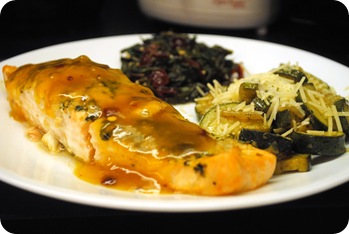 Are you a big risk-taker when it comes to trying new recipes?  Do you like attempting new recipes with ingredients you’ve never had before?