Yesterday I was, as we sometimes say in the South, “wore slap out.”  I don’t think I mentioned on the blog that I tried a kickboxing class on Monday that was waaaay out of my league.  They should list the fitness classes at the Y like they do in a college course catalogue – with course prerequisites.  For instance, if you can’t handle a full minute of jumping jacks, you shouldn’t take the kickboxing class.  Because I can’t.  But I did.  However, once I accepted my shortcomings and did the little weenie alternative version of jumping jacks, I could keep up a lot better.  I was ready to quit halfway through, but I stuck with it and am proud for doing so.  I might even go back again!

I had been wanting to try kickboxing for awhile (back when I thought it was just a lot of punching and kicking), and I made a deal with a Twitterfriend (hi, Jen!) that I’d go to my scary-sounding class I’d been wanting to try if she went to a scary-sounding class she’d been wanting to try.  We both went because we knew we had to report back to the other – Twitter accountability FTW!! Oh, and the weirdest thing about that class – we did so many squats that I was sure I tore my hamstrings, but it’s my biceps that still hurt 3 days later.  My arms hurt from punching invisible bad guys – I didn’t think that was possible!

So back to my tiredness – between that kick-ass workout and me doing C25K in super-humid high temps, I was drained.  I skipped Zumba last night.  On Cinco de Mayo. I was looking forward to doing salsa and cha-cha and merengue and all that booty-shaking Latin dancing on Cinco de Mayo, but it just wasn’t in the cards.  So what did I do?

I made up a margarita recipe instead.

2 shots tequila (I use the cheap stuff in mixed drinks) 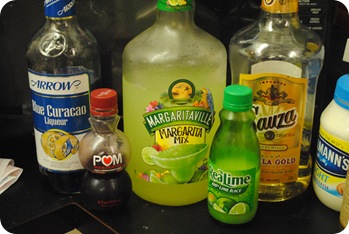 Mix all ingredients together in a shaker with ice and pour into glasses rimmed with salt.

*I think this would be better with plain lime juice instead of the “just-add-tequila” margarita mix; our drinks were on the sweeter side, and the blue Curaçao liqueur is probably sweet enough to carry the drink by itself.

I initially used the blue Curaçao because I didn’t have any triple sec, but when I realized it would combine with the POM Wonderful to make purple(ish), I named it appropriately. 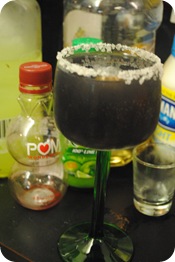 Alongside the Pomaritas, I made turkey taco salad. 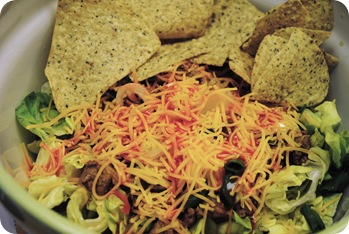 I browned some ground turkey and added one of those cheapy quicky taco seasoning packets, dumped some in a giant bowl of leaves, and topped with some salsa verde, low-fat sour cream, shredded cheddar, spring onions (from our produce co-op!), a crapload of Texas Pete, and some Multigrain Tostitos (which taste exactly like nekkid Doritos) for crumbling.

Do you schedule your rest days from exercise or just take them as you need them?  What did you do for Cinco de Mayo?  I think I’m heading to Chili’s this afternoon to celebrate Seis de Mayo.