I hope everyone had a fabulous weekend!  I worked at the lakehouse this weekend, and while I didn’t write any posts, I finally caught up on reading blogs after two weeks of barely making a dent in Google Reader!  Oh and I also got a sunburned scalp, but that’s not as awesome.

For the greens, I used chopped bacon instead of the pecans it called for, just because I had bacon that needed to be used and didn’t feel like toasting nuts. 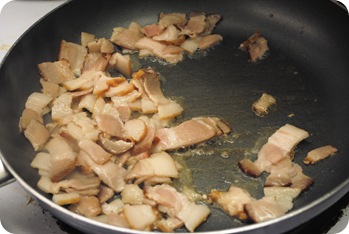 I cooked the bacon and sautéed onion and garlic while Mom tore up the greens. 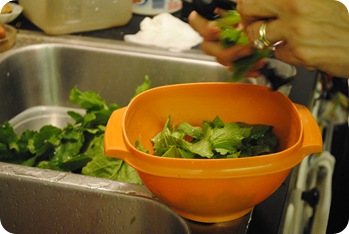 Then I added them to the pan to wilt… 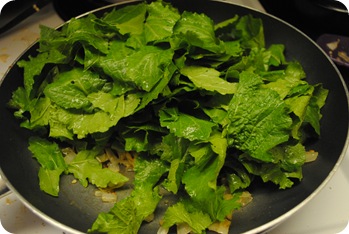 …while I cleaned, cut, and salt-and-peppered the turnips. 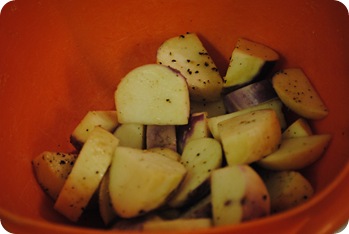 The finished greens after wilting them, adding and reducing the dijon + stock, and topping with bacon: 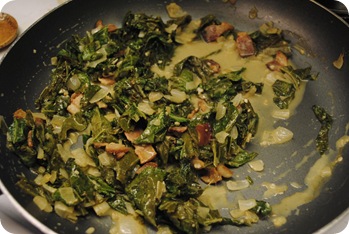 The finished turnips after cooking and adding paprika and red wine vinegar (sadly we had run out of poppy seeds!) 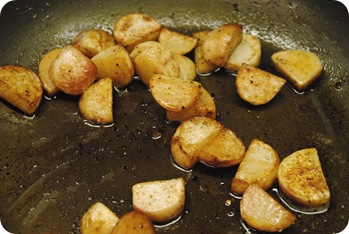 I had these alongside a grilled pork chop topped with apple and onion relish from Four Oaks Farm. 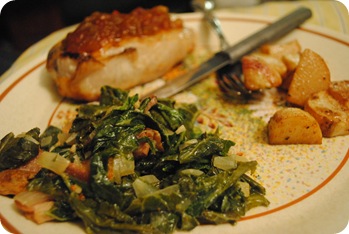 Verdict?  The greens were still a little bitter, and the turnips had an…interesting taste.  I’d like to get some poppy seeds and try the turnip recipe again, but maybe I’ll look for a different recipe for the greens.  Does anyone have any good ones?

On the Couch to 5K front, I attempted Week 6 Day 3 on Saturday morning at the lakehouse, and I don’t know if it was the early hour, the different route, the mental block about a “long” run, or a combination of the three, but I didn’t make it.  I felt so weak and a little queasy (which I think the early morning hour had something to do with), and I just wasn’t in the right mindset to run.  I’d like to keep trying to run increasingly longer intervals, but I hope that I’ll be able to keep up with it now that I’m not doing a set program.  There’s something about having a routine and a plan that makes it easier to complete.  I’m not good at saying “I’ll just run until I can’t anymore” because I get scared and give up way before my limit.  So the next time I run, I’ll write down intervals on my hand before I start and will stick with them.

So this week, I’m working on some health goals (in addition to some personal ones): drink a crapton of water every day, attend Zumba and Yoga classes, and don’t drink alcohol during the week (I’ve gotten in the habit of drinking a beer or a glass of wine every other day or so, and I need to break it!).  I’ve been majorly slacking in my diet and fitness priorities lately, and while it’s due in part to this depressive funk, I can pull out of it if I just try harder!

Alright, enough whiny “dear diary” stuff…what’s your favorite in-season vegetable (or fruit!) and how do you prepare it?  Anything you’ve never had before but would like to try?  I’ve never had rhubarb and want to make something with it, and I’ve only ever tried pickled beets (twice), so I’m looking forward to tackling the ones we got in this produce bunch!