When I start losing weight, one of the mistakes I often fall prey to is dressing ahead of the game.  I get excited with my progress and subsequently more daring with my wardrobe, wearing things that are too tight or too revealing.  I forget that while Current Me looks much better than Old Me, people in public are only seeing Current Me and can’t see Old Me for comparison.  Just because I look better than I did doesn’t mean I look good now…I still have a long way to go. 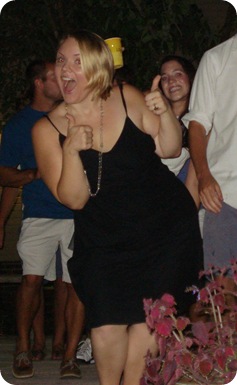 These were pretty much the most flattering pictures I got at my friend Kate’s graduation party on Friday night (note to self: shut thine yap when there’s a camera around).  I love that I had confidence to get up on the deck and dance with everyone instead of being a wallflower, but I have major regrets about being so exposed in that dress, because I was easily the biggest person there by at least 50 pounds.

This kind of parallels a quirk neurosis of mine that I might not’ve expanded on before.  I don’t look in mirrors when I’m out in public, I can’t talk while I look in a mirror, and you’ll probably never see a vlog of me (or if you do, it’ll be in the far distant future).  When I’m in the moment not thinking about how I look, I feel free, unburdened, and I’m able to let go of the self-consciousness I carry around with me 24/7.  When I see myself in a mirror in public, I get jarred back to reality and realize, “wow, that’s what all these people are seeing right now?” and I’m usually not happy with it.  I’m terrified of seeing myself on video because I just don’t want to know exactly how others see me.  Effed up, right?  That little quirk probably greatly contributed to the denial that led to me weighing 270 pounds.

When I make wardrobe choices now and decide I look ok when I’m standing still in the mirror at home, I don’t always think far enough ahead to “how will this be received by other people who might see you?” or “will you regret this outfit if you see a picture of yourself from behind later?”  When I was at the party on Friday, I felt good, almost confident.  When I got home and looked at the pictures, it embarrassed the hell out of me to see that how I felt I looked and how I actually looked were so vastly different.  Blaaaahhhhh.

On a positive note, it was nice to spend some time with some childhood friends! 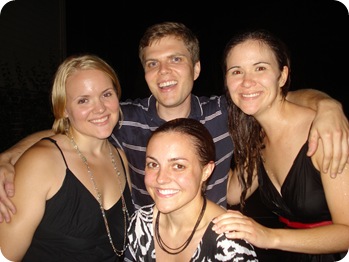 Next year, I’m jumping in the pool fully-clothed with them!

Does anyone else out there with (major) self-esteem issues share this quirk with me?   I don’t know if I should start dressing like a nun or stop looking at pictures of myself!

About me Clothing introspection