I just watched the first episode of “Huge” on ABC Family, against everything that I stand for (I abhor hour-long dramas, save for “Lost.”  My attention span is way too short to dedicate an hour at a time to a show to wait a week for the next part in the saga.).  As someone who’s been overweight her whole life and who has some deep-seated issues with how fat people are portrayed in society, I definitely was interested in how this show would play out.  (I really should’ve live-blogged this – I’m afraid I’m going to get some details wrong and leave out some good points!) 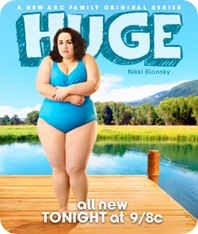 There are two main protagonists: Willamena (“Will”), a nonconformist who sells contraband food to her fellow campers and doesn’t seem to give a rat’s ass about losing weight, and Amber, a veteran serial dieter who’s blonde and pretty and visibly smaller and cuter than the rest of the campers.  The hot, fit assistant trainer fella takes a liking to Amber almost instantly.  That doesn’t happen in real life.

Will makes an interesting point up front, asking in a group therapy session why she should hate her body just because everyone else does and wants her to.  It makes me wonder if the kids who go to these camps are sent there against their will (as I assume Will was) or if they go on their own accord.  I never went to sleepaway fat kid camp, but I did participate in fat kid day camp at a nearby college for several years.  I definitely remember not liking it and never wanting to go, but I willingly played along while I was there.  However, I never (consciously) made the association that because I was sent there, people hated how I looked.  Looking back on it now, maybe that’s why I resented it and why it never “fixed” me?  I digress.

The other main character, Amber, gets under my skin – at least the purpose of her character does.  Early in the show, one of the campers says that as far as dating goes, they’ve all got a level playing field since all of the campers are overweight.  Amber looks nothing like the other characters, though.  She’s smaller, has bleached-blonde hair, and is unquestionably pretty.  There are some pretty homely-looking actors filling the other campers’ roles, I’m sorry to say.  The thing that irks me about this is, of course all the boys still go to the prettiest, thinnest, most typical illustration of beauty they can find.  Even though the playing field is “level,” it most certainly isn’t, at least not this early in the game – I am basing my rant on just one episode, after all.  The writers of the show might be attempting to say “hey, even fat girls can be pretty,” but to me it just looks like “the least fat girl still gets the attention.”

Another thing that struck me about the show is that one character got kicked out for purging, and the girls in her cabin were upset that the camp’s administration chose to show her the door instead of trying to help.  One girl made the point that the purpose of the camp was to lose weight and that bulimia was past the camp’s scope, but the girls seemed distraught that the powers-that-be just let the girl go when she clearly needed an intervention.  I hope that the show will continue to address more difficult issues like this.  I hate watching “The Biggest Loser” because it’s all about results, about how much the contestants can lose every week, and I think that approach can serve to the detriment of both the contestants and the viewers at home.  (Did y’all read about the former contestant who claims The Biggest Loser gave her an eating disorder?)

So the show has promise.  If they refrain from falling into stereotypes like “fat people are only motivated by food,” “they’re lazy,” and “fat girls CAN get boys…if they’re less fat and prettier than the other fat girls,” I’ll call it a victory.  Like Olivia said on Twitter, I’d like it more if larger, more normal-looking people were portrayed in regular TV shows.  Why do we have to wait around for a show about fat people to see a fat person (or not-skinny person) in a leading role?

I’m actively trying to lose weight for my health and happiness and am advocating healthiness over unhealthiness, just to be clear.  I’m not coming at this from a “fat acceptance” standpoint, nor am I saying we should marginalize fat people and shame them into losing weight by not portraying them in entertainment.  What I (think I) am saying is, I’d rather see a curvier person in a leading role, getting dates, being promoted at work, and being treated with respect than see yet another stick-figure main character with a fat friend for comic relief like we usually do.

Did anyone else watch “Huge?”  Got anything to add or argue about how overweight people are often portrayed in TV and movies?