As part of our CSA, we’ve gotten several eggplants in the past couple of weeks.  I could probably count on one hand the number of times I’ve had eggplant in my life, so I’m ashamed to say I’ve been avoiding them just a tad.  I even had to toss out a squishy moldy casualty last night.  Monsieur Aubergine, I do apologize for failing you.

Thinking back to the stuffed zucchini I made last week, I decided to try my hand at adapting the recipe for eggplant and making an entire meal out of it.

I sauteed some diced chicken in a skillet with EVOO and garlic and set it aside in a big bowl of tomato sauce and fresh chopped basil where I’d eventually mix everything together.  I started out with one small can of sauce but had to add another. 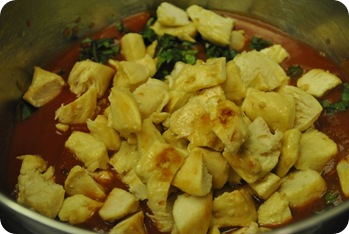 I used two smallish eggplants, removed their little hats, and sliced them lengthwise.  Using my trusty grapefruit spoon, I removed the insides and chopped some of them up to include in the dish. 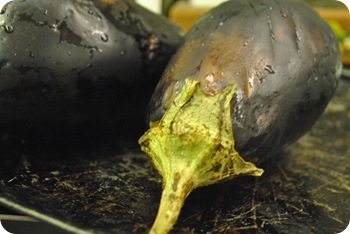 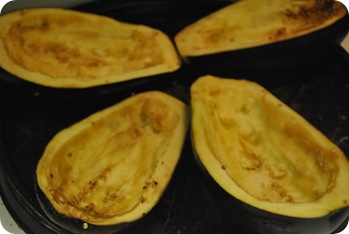 In a skillet with EVOO, I sautéed baby bella mushrooms, onion, bell pepper, and the diced eggplant. 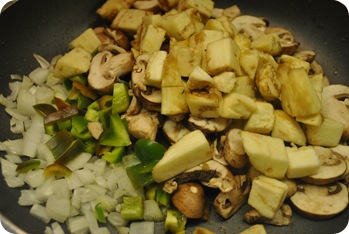 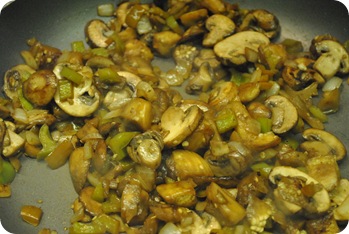 I threw the sautéed veggies into the bowl with the basil, chicken, and tomato sauce and added a healthy sprinkle of dried oregano and a handful of mozzarella cheese.  I spooned the mixture into each hollowed eggplant half and sprinkled with even MORE cheese.  Mmm…cheese. 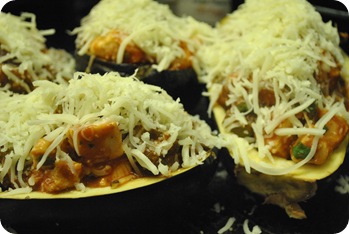 They went into a 375° oven for 30 minutes and came out beautifully! 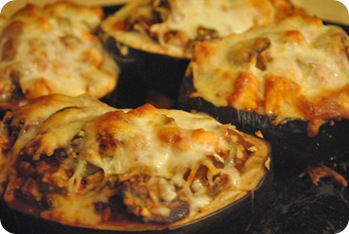 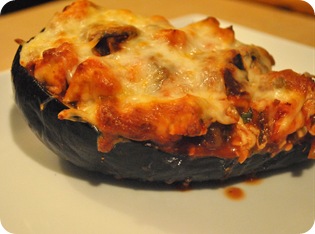 I ate the whole thing, skin and all.  Do people normally eat the skin?  It was a little tough, but a sharp steak knife took care of it.  Plus, most of the fiber and nutrients are most likely in the skin, right?  I’m glad I used two eggplants, because now I’ve got leftovers for lunch!

What’s your favorite eggplant recipe?  I’ve got another one or two in the fridge and I need some ideas on how to use it!  I might attempt some eggplant fries if I’m feeling confident enough…