A perfect day and my addiction

Friday was one of the best days I’ve had in awhile.  Mom had the day off, so we headed to Riverbanks Zoo to hang out with the animals.  I haven’t been since I got my new camera, so I had a great time practicing my photography!  The weather was PERFECT – it was in the low 80s all day and breezy at times.  I didn’t break a sweat once while we were there!

I’ll spare you (most of) the boring critter pics, but here’s what I ate… 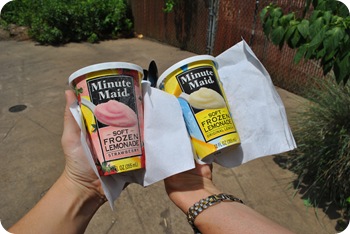 After walking around for an hour or so, we got some soft frozen lemonade – strawberry-flavored for me!   I made a new friend… 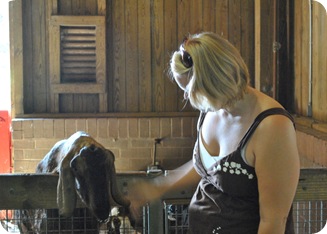 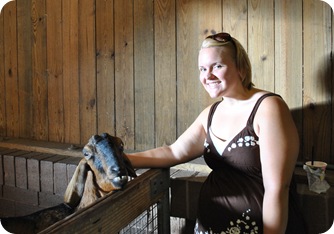 A face only a mother (and me!) could love. 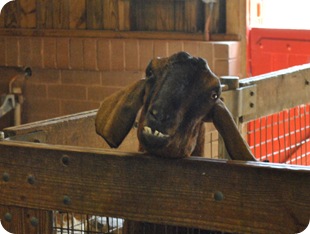 The best day ever at the zoo clearly gets two thumbs up. 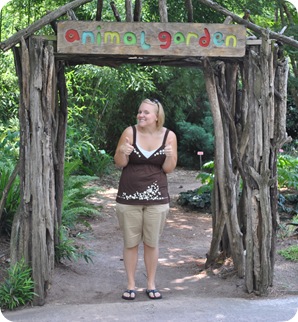 After walking around for about 2.5 hours, we left the zoo and headed for lunch at The Gourmet Shop.  I’ve shopped here a few times but have never eaten there until now!  I had a mimosa… 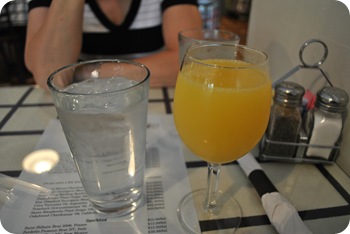 …and a PLT – pancetta, lettuce, and tomato sandwich with basil mayonnaise, and pesto pasta salad on the side.  (I just recently had my first BLT sandwich ever – I HATE fresh tomatoes, but I cut them thin for my BLT and really liked it!  This PLT had thinly sliced tomatoes and was right up my alley!) 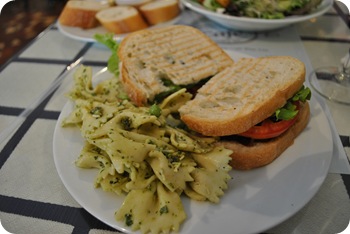 Then we headed to my best/worst temptation, Cupcake, where we split a chocolate peanut butter and a lemon cupcake… 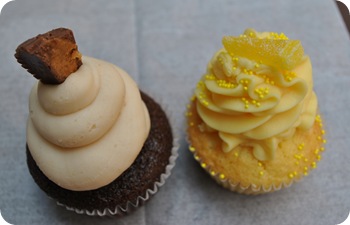 …which caused the worst sugar crash in the world a few hours later.  I swear, I never have sugar crashes like the ones Cupcake causes (and they’re not even that big!  It’s a good thing I go there pretty infrequently).  After a well-deserved nap, I was good to go and began making dinner.

I kept the fruit from Thursday’s sangria in the fridge, so I poured in another bottle of wine and let it soak while I prepared some chicken to marinate in garlic, balsamic vinegar, basil, oregano, and salt and pepper.  While those hung out, I cleaned this pretty girl’s cage out on the deck… 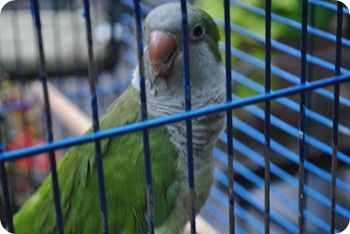 …and got the grill ready to make dinner.  Of course my camera battery died as I was prepping stuff, but I got the finished products on film. 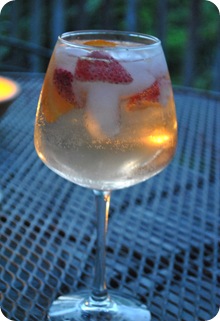 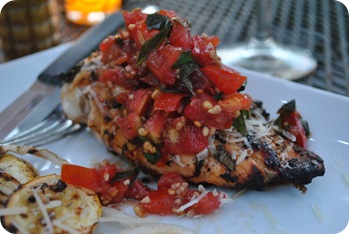 Alongside the chicken, I grilled slices of onion and squash with a sprinkle of parmesan cheese on top (which is totally unnecessary now that I think about it…added calories without added taste). 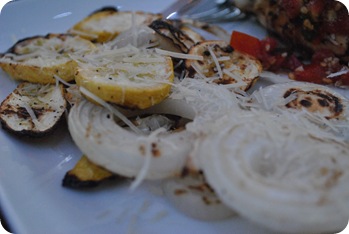 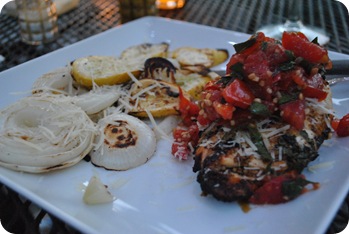 Dinner was light, fresh, simple, and perfect after my complicated coma-inducing eats from earlier.

You might be asking yourself, “Katherine…aren’t you trying to lose weight?”  Because judging by the frozen lemonade, the mimosa, the sandwich, the pasta salad, the cupcakes, and the sangria, I’m clearly not trying anymore.  At least it certainly looks that way.  I keep getting depressed because I’m not getting the results that I want, but I have no room to be mad at myself because I’m not putting forth the effort required to achieve said results.  Yet another one of my loverly vicious cycles.

It sucks, it’s harmful to my health, it’s a waste of time, a waste of energy…I know I feel bad physically lately because I’m not on my best eating and exercising behaviors.  All signs are pointing to me knocking this bullshit off, so why do I keep doing it?

It’s like a shark or a zombie or – dare I say it? – Edward Cullen with the taste of human blood.  Once they taste it, it’s impossible not to go in a frenzy.  That’s how I am with sugar and beer and wine. Once I have it a few times in a row, I get in the habit of “ooh that tastes good, I want more” and my internal checks and balances system never developed.  For one reason or another, I don’t have that “this will come back to screw you later” mechanism that keeps so many skinny people from eating their weight in chocolate (like I would totally do if given the chance).  Am I externalizing the blame so as not to feel so bad?  Maybe, but this “I’m addicted” explanation doesn’t make my situation any easier to fix.  I feel like a junkie who’s just looking for their next fix, and I don’t want to do that anymore.  I LOVE chocolate, baked goods, beer, and wine, but they’ll be a lot more special if I don’t have them every day (right?  RIGHT?!?).  So the only solution (at least now while I’m trying to lose weight) is to completely detox myself from them, sadly, and hope I have the self-respect and conviction enough to keep it up.  I’m a rockstar at maintaining my weight now, but I’m not losing like I want to, and it’s due completely to these indulgences I keep giving in to.

Anyone got a padded cell I could borrow while I come down?