Last night, I got together with some BFFs for another rousing game of trivia.  Though we didn’t win the first round of normal categories at 7:30, we dominated at naughty trivia at 10pm.  What can I say?  Sometimes it pays to be perverted.  We’ve never won before, so needless to say, we were thrilled (especially since the prize was a $50 bar tab for next week)! 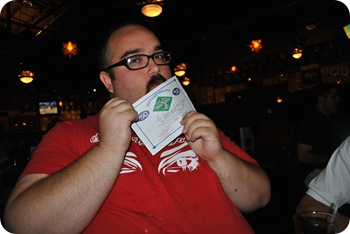 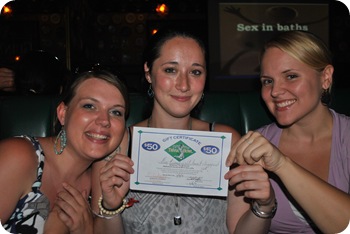 (Lesson of the day, kids: “ablutophilia” is a fetish or preoccupation with sex in baths – hence those words above my face.  Don’t say I never taught ya nothin’.)

Flying Saucer was the venue, and the USA flight was my beer selection. 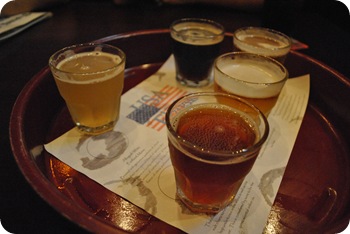 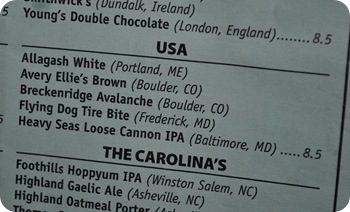 I’m a sucker for a good flight.  They offer 141 bottled varieties (that was a trivia question!), and check out their wall o’ taps…

If I make it to heaven, it will have a wall of infinite taps.  Also?  I parallel parked like a champ.  I’d call the night an overall success. 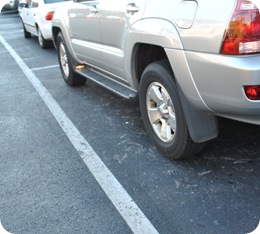 Today I weighed in at the doctor’s office and found out I’ve lost a pound over the past two weeks.  I’ll definitely take it, after all the struggling I’ve been doing lately.  I’m feeling good about attacking these next two weeks with gusto, and I’m determined to see some better results at the scale at my next appointment.  I pulled a back muscle over the weekend and haven’t worked out since, but I’m hoping that the heating pad will help fix me up quickly!

For dinner tonight, I kicked off my recommitment to clean eating by making a marinade/glaze for some salmon.

“Throw Some Shit Together and Cross Your Fingers” Salmon Marinade 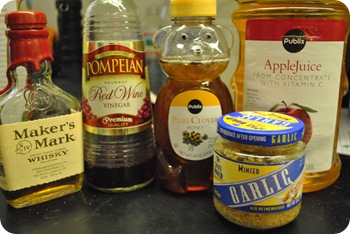 Combine all ingredients in a saucepan and bring to a boil, whisking every so often, until the volume has reduced by half or until it’s thick enough to your liking.  (I wish I had reduced mine further, because it was still a bit too thin.)  Let the glaze cool to at least lukewarm and then pour into a dish.  Place salmon filets in dish and let marinade for at least 45 minutes.  I brushed the marinade on the salmon when I first put it on the grill, but since the raw fish had been festering hanging out in it, I didn’t keep basting it.

Alongside my salmon, I had grilled zucchini slices (cut on the bias to increase surface area!) sprayed with some EVOO and sprinkled with my beloved Cavender’s Greek Seasoning. 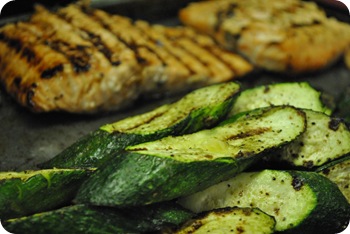 I sprinkled some goat cheese on the zucchini, and I had some canned green beans as well. 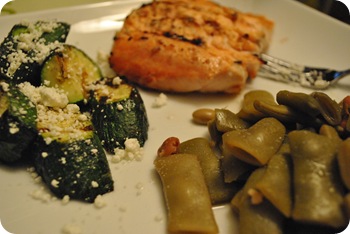 Check out the sticker I found on a watermelon we recently got: 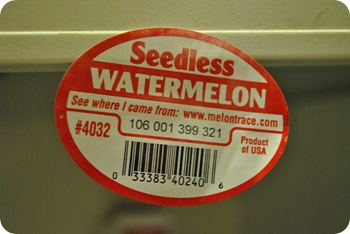 After tracking it, I found it was a local melon! 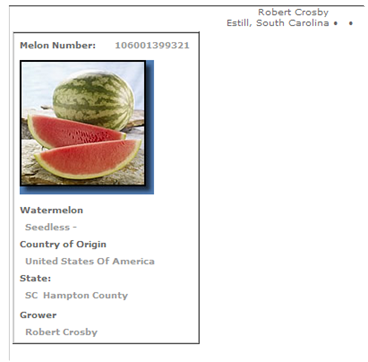 I don’t know about y’all, but I think that’s pretty damned cool.  I even got a little verklempt thinking about it!  Yeah, I cry at the weirdest things.  Hush.  I’ve seen the “track your dollar” stamps on my bills before, but I’ve never seen this concept on produce!  Have you ever tracked your produce with a sticker like this?  Do you try to eat more local foods in the summer, or even year-round?