Lizzie has ruined me.  She told me a few days ago that she tried to re-create the squash bisque I got at our first blogger meetup.  Even though that particular bisque was made with summer squash, I haven’t been able to get the idea of butternut squash soup out of my head. 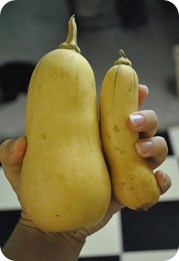 So I searched the Food Network website for a recipe and found this gem.  In addition to the two puny squashes (seriously…look how tiny: 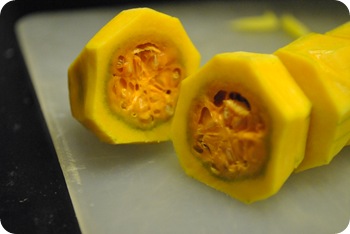 Looks like sushi, right?), I used two packages of frozen squash from Publix (and next time, I’ll ONLY use the frozen stuff…so much easier than peeling and de-seeding and chopping), and I used a can of diced tomatoes instead of whole.  I’ve been disappointed before with the blandness of homemade soup, but this recipe taught me a trick that will hopefully work for other recipes: 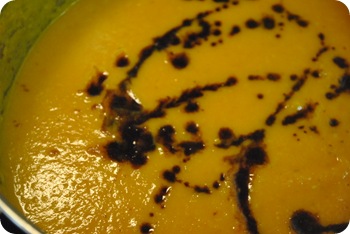 BALSAMIC VINEGAR!!1!!!!11  Seriously, I could drink this stuff by itself – why haven’t I poured it in my soup before??  It added some mad depth of flavor.

A giant orange mug, some parmesan cheese and extra balsamic vinegar, and I was good to go: 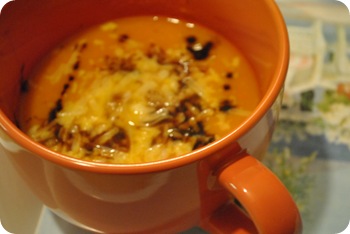 This mug is the Cafe Au Lait mug from Pier1, and it’s my professional opinion that everyone needs one.  It holds all 4 cups’ worth of coffee from my little coffee maker, and I haven’t used another mug since I’ve gotten it.

In addition to the soup, I made chicken in the same vein as the pork with apples and onions I made a couple of weeks ago, but I covered it in foil for the first 20 minutes and then uncovered it for 10…aaaaand it was still undercooked so I nuked it for 5 minutes. 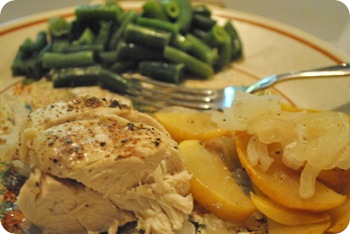 And then I exploded.

EDIT:  I hadn’t read Lizzie’s latest post about butternut squash when I wrote this…how insane is that coincidence??