I ran the Midnight Flight 5K on Friday night in Anderson, SC with Carla, Cristina, and Mark.  Though I’ve walked tons of 5Ks, this was the first I’ve ever run!  I could’ve been better prepared, but I did it and I had fun (overall), and I’m proud of myself for finishing!

I left home around 1pm on Friday and had a 2.5 hour drive ahead of me, so I grabbed a turkey/cranberry wrap from a local deli. 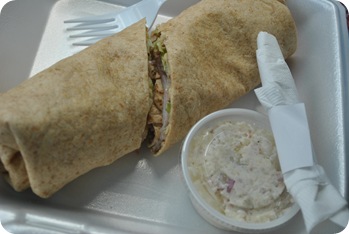 I got to Carla and Cristina’s house and hung out a little while before leaving for one of my favorite places, Pot Belly Deli in Clemson.  They were eating a late lunch/early dinner, and I should’ve made better plans (i.e., not eaten the turkey wrap earlier), because if I go to PBD, I’m getting the St. Stephen: turkey, bacon, and provolone on a croissant with honey mustard, lettuce, and tomato (tomatoes are the fruit of the devil).  I was going to get something lighter, but Mark got one and I had to.  Remind me to punch him in the face, ‘kay? 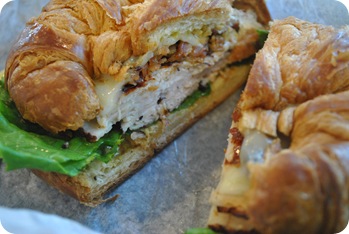 I regret nothing.  No, actually, I do regret this.  After driving to Anderson and making a couple of stops, we ended up at our parking spot at the Y and picked up our packets…and proceeded to WAIT.  We had at least 2 hours to kill before the first event – both Cristina and Carla were BEASTS and ran ALL THREE EVENTS – the 1 mile at 9pm, the 5K at 10pm, and the 10K at 11pm.  Wow. 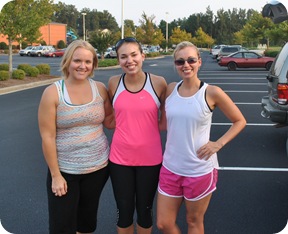 While I was putting my shoes on in the back of my car, this guy came up and started taking pictures of me, paparazzi-style before asking for my name and info – turns out he was from the local paper!  This shot was on their website that night: 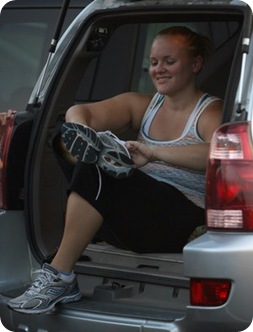 That’s my “I’m being stalked and this is a fake smile” face.

I had a real “big-girl” time chip and everything! 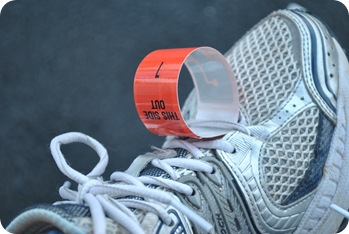 The wait and anticipation before the events was brutal, so the Sisters Shorts entertained us as best they could. 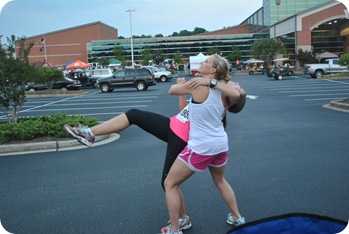 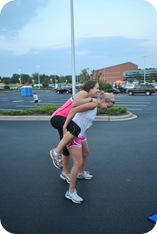 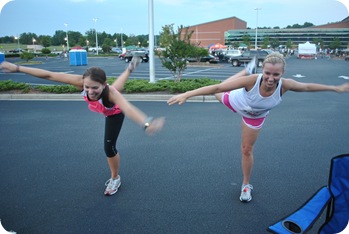 When it started getting dark, we walked over to the expo to see if Carla could find some new shoes.  Love that new shoe smell. 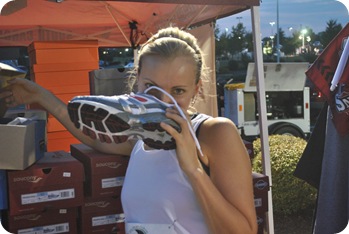 I have to say first off that I owe Carla my firstborn child (or I would if she liked kids).  She slogged the 5K with me and cheered me on the whole way.  I’m getting choked up just thinking about how much she helped me – I wouldn’t have been able to do it without her.

The first half of the course was flat road and then downhill – a total confidence-booster.  At the one mile marker, the clock read 13 minutes and change, which I was fine with.  I ran half of the course without stopping, and then we turned around and started running back…uphill.  Here’s where I had to stop a couple of times to walk – I was getting wicked reflux from the St. Stephen (I still blame Mark) and had to slow down for my stomach to settle.  Ugh.  The hill was brutal, and I kept wanting to push myself to run, but I just couldn’t make it yet.  I’d like to think that maybe if the entire course was flat or had smaller hills, I would’ve been fine, but who knows?

So we trudge up the hill, I stop to walk one of those times, and Carla says “push through it, you can do it!” or something equally positive and motivating, and I kinda bitched out at her…I’m sorry, Carla.  I didn’t want to puke on you, though.

She was so motivating to other runners/walkers, too!  When I was dealing with my reflux/exhaustion/grumpies, she’d turn her efforts to others and say “you’re doing a great job!” to people we’d pass.  I’d call her Mother Teresa if she didn’t have such a potty mouth.

We reached the flat part of the course and I thought, “oh yay! I can handle this” but was already exhausted…I couldn’t handle too much more, and I still had a mile or so to go.  Somehow I got to the last turn where it was literally downhill from there.  It was maybe the 0.1 of 3.1, so lots of people were gathered around the finish line.  The crowd definitely made me straighten up and move a little faster, but nothing made me move faster than seeing that glorious finish line ahead.  I kept looking a few feet ahead of me at the road and then glancing up (because I was convinced that if I kept my eyes on the finish line, it’d get farther away).  Finally we were close enough to see camera flashes and I put a big smile on for the cameras and we were DONE.  [As I’m proofreading this post, I get the email that the race pictures are ready, so here they are in their ugly, sweaty glory] 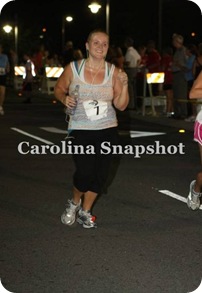 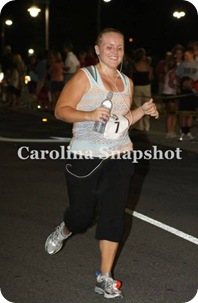 I was so happy to be finished! I grabbed an orange slice and half a banana and trudged back to the car where I promptly ripped off my shoes and laid down on the asphalt like roadkill.

My official time was 42:36, and I had privately set a goal of 45 minutes, so I was happy enough with that.  For someone who had never run more than 2 miles before (and who had run/walked 2 miles the week prior in 40 minutes), I think I did pretty well! (Just nerded out and calculated that my average pace was a 13.66 minute mile – I’m cool with that!)

Next time will be better, though.

HUGE congrats to Cristina and Carla who made the 1-mile race their bitch…I think they took the 1st and 2nd spots in their age group!  They kicked ass at the 10K too, and deserve a standing ovation because the course was ROUGH.  And Mark…this was his first 5K, and his time was 34:14.  That’s two punches I owe him now.