Annelies at Attune Foods contacted me a couple of weeks ago about doing a review, and she sent me a box of Attune-owned Uncle Sam cereal to try out.  Thanks, Annelies! 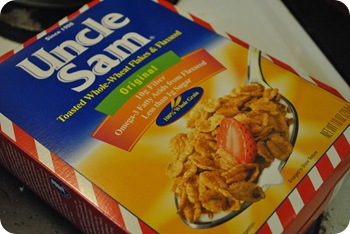 I wouldn’t eat this on its own (I’m a child of the 80s-90s…if I’m going to have traditional cereal-and-milk for breakfast, I want it to taste like sugar), but it would be good mixed with fruit and yogurt or made into granola.  Even though it tastes bland by itself, it packs some nutritional punch: 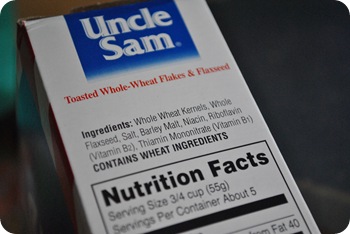 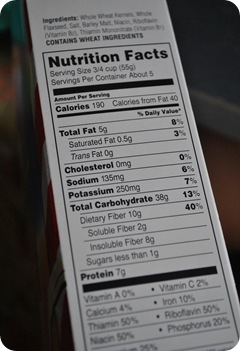 I pulled up the nutritional stats on my favorite healthy cereal, Kashi GoLean, to compare, and if I’m being completely honest, the Kashi wins.  Per cup, it’s got 140 calories and 1 gram of fat, less sodium, more potassium, fewer carbs (though more sugar), and almost twice as much protein as the Uncle Sam.  From a purist standpoint, the Uncle Sam might win for fewest ingredients, but I’d still choose the Kashi.  Sorry, Sam.

So what was the first way I used my sample?  What better way to enjoy a healthy cereal than to mix it with sugar and butter?!

2 peaches (you could use different fruits)

I cut two peaches up and sprinkled them with cinnamon, nutmeg, and some Splenda. 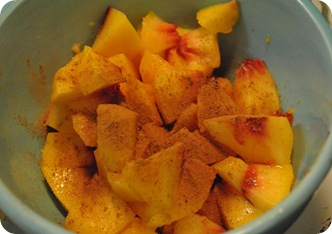 I mixed about 1 tsp of cinnamon, a dash of nutmeg, 1 Tbls of Splenda brown sugar, 1 Tbls white sugar, 2 Tbls flour, and the cereal in a bowl before pouring the melted butter substitute on top and mixing together well. 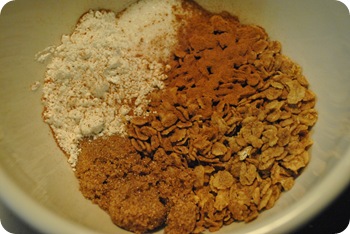 I put the peaches into individual ramekins and topped with the cereal mixture before putting it in a 325° oven for 10-15 minutes. 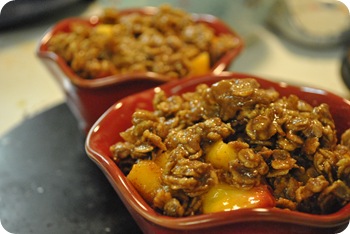 Once it came out, I topped it with vanilla frozen yogurt and devoured it. 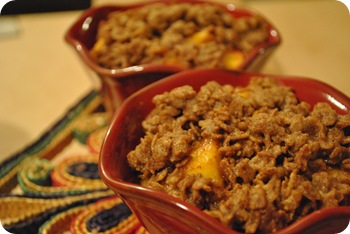 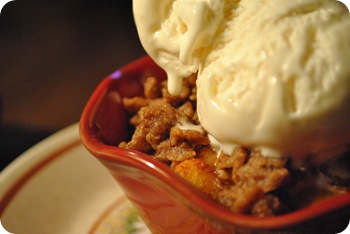 Leave it to me to jazz up a “health food” in this manner.

How do you use boring old healthy cereals besides in milk or yogurt?  I’ve used FiberOne on chicken tenders before and sprinkled in salad – any other suggestions?