On Saturday, I went to Carowinds with a group of friends.  It’s a theme park on the border of North and South Carolina, and it’s been a few years since I’ve been! 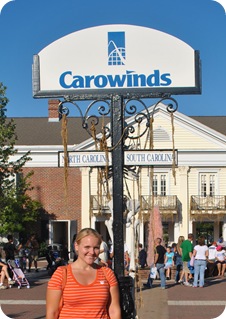 During this time of year, they close the park early and re-open at night as “Scarowinds” for Halloween-themed fun.  It was neat to see all the ghostly decorations up! 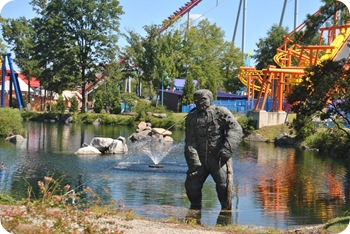 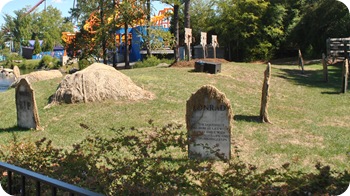 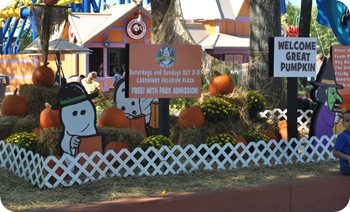 I’m not a huge thrill-seeker, and I’m kinda mad at myself that I didn’t go outside my comfort zone and try a big coaster, but I stuck to the smaller ones that still gave me enough of an adrenaline rush.  I was having lots of fun toward the end riding my little “weenie-coasters,” so I probably would’ve had fun on a bigger one! 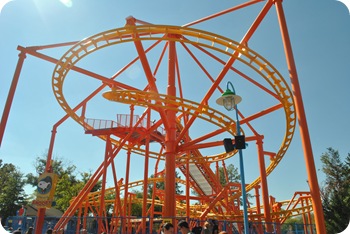 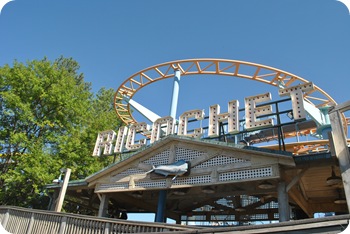 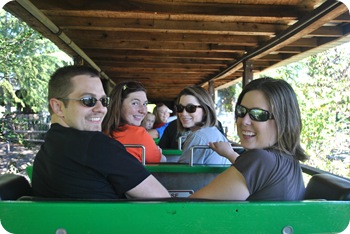 For lunch, I had a plate of overpriced comfort food: chicken tenders with green beans and mac ‘n’ cheese 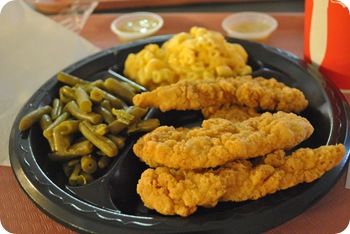 Then later in the day, I got some mint chocolate Dippin’ Dots. 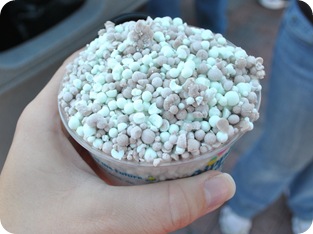 Instead of buying some crappy souvenir that would take up more room in my closet (I’ve got 3 pairs of Mickey Mouse ears I can’t bring myself to throw away), I got a chocolate-covered apple to bring home to share with mah momz.  Healthier than the funnel cake I wanted, maybe? 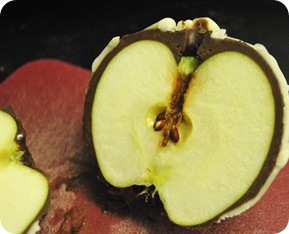 My hips were aching from all the walking I did on Saturday!  And I nearly broke my nose on one ride, but thankfully the soreness is almost gone.

And trying to semi-catch up on some eats…yesterday morning I made a monster veggie omelette to end all omelettes…filled with peppers and onions and topped with salsa and Texas Pete.  There was some cheese sprinkled in there, too, natch. 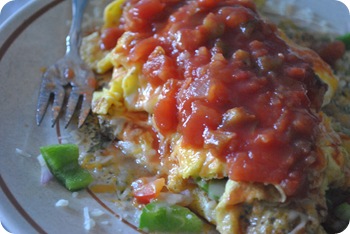 I spent 2 hours bundled up in the hammock on the deck last night, listening to NPR podcasts and knitting…I’m officially 80 years old.  When I was done, I was ravenous…grabbing my camera was the furthest thing from my mind, but I wish I had remembered to take a picture of my dinner – a Greek salad with chicken, cucumbers, peppers and onions, a smidge of Zoe’s Kitchen Greek dressing, and this killer Greek yogurt dip I found, laced with cucumbers and dill.  I was scared to combine the dip and dressing at first, but the combination was AMAZING.

Aaaand here’s my lunch from today…butternut squash soup with balsamic vinegar and parmesan cheese with collard greens on the side.  I fed the bacon to the dog so she’d let me dine in peace. 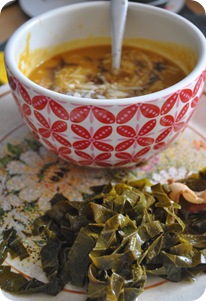 I’m trying to get better at food blogging again, but it’ll take a few days to get back on track.  Reminding myself to go grab my camera used to help me make better “in the moment” decisions, a filter I’ve needed lately!

Are you a big rollercoaster fan?  Do you like amusement parks?  I want to go to Disney again soooo bad, and I know I’m going to cry like a fangirl when I walk into the Wizarding World of Harry Potter for the first time.