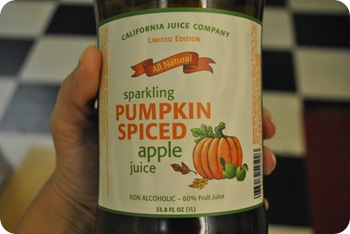 Actually, just don’t read the ol’ blog here for the next month or so, because I’m knee-deep in an obsession that just won’t quit. 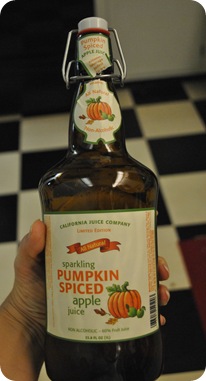 This was an impulse buy from – where else? – World Market, and it’s amaaaaaazing.  And look how neat the bottle is!  I’m easily amused.  When this is all gone (and it’ll take awhile…it’s being savored one small glass at a time), I’m going to attempt my own.  I’d bet if you took regular apple juice (low-sugar, anyone?) and simmered it with cinnamon, nutmeg, and cloves before refrigerating it again, it’d be almost the same thing; the “sparkling” didn’t last very long, anyway.  Also, if you’re so inclined, I can tell that Goldschläger would complement this beverage very well.  I might just have to test it out on myself to make sure….

I was so cold yesterday and could NOT get warm, even after going for a run and bundling up in sweats.  I was in the mood for some hot comfort food and asked around on Twitter for a pumpkin chili recipe, and got several great links I’d love to try in the future.  This one from RecipeGirl, however, won for dinner. 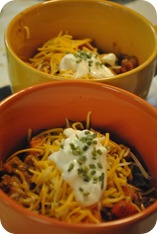 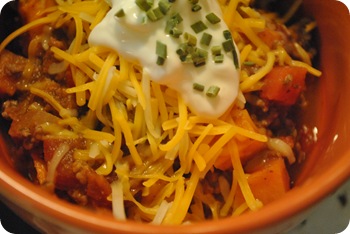 I made a few changes, though, and next time I’ll make a few more.  I added diced sweet potato (which didn’t cook in the crockpot – yes, I used the crockpot – so I had to fish every tiny piece out and nuke it) as well as some sage and rosemary, and even though I used minced garlic, I added garlic powder after tasting it.  Next time, I either won’t use any cumin at all, or I’ll use significantly less.  I wanted it to be spicy (chili powder) and savory (garlic, sage, rosemary) at the same time, and the cumin gave it a “Mexican food” smokiness I didn’t think belonged.

Of course I had a corn muffin with mine, all crumbled up on top and mixed together. 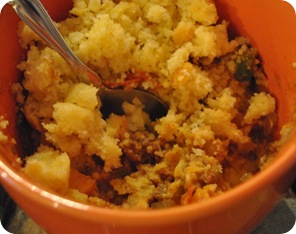