I make dinner (almost) every night and try to do fun stuff, but I wanted to do something new and homemade last night for Mom’s birthday. Last week in our CSA pickup, we got some kale and a couple of winter squashes (which I assumed were a variety of acorn), so I decided to stuff them and bake them.

Kale and Sage Sausage-Stuffed Squash (for 2)

1 large bunch of kale, ribs removed and torn or chopped

Cut the tops off the squash and hollow out seeds and some flesh with a grapefruit spoon. Sprinkle with salt and pepper, and roast in a 425° oven for 30 minutes or so. In the meantime, brown the sausage in a pan and add the onion, garlic, and sage. Once the sausage is almost cooked, add the tomato and cook for a few minutes. Next, add the kale and let it wilt in the pan, adding some salt and pepper. Once the kale has cooked down, transfer the mixture to a bowl, but try to avoid adding all the water that cooked out of the veggies. In the bowl, add the egg whites, bread crumbs and cheese and mix together well.

Remove squash shells from the oven and fill with sausage mixture, topping with extra cheese. Bake another 20 minutes at 425°. 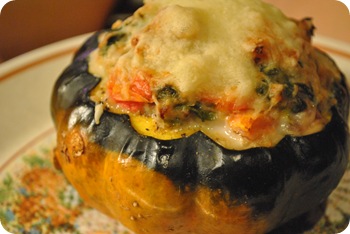 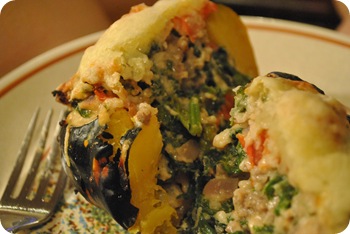 It wasn’t until the squash were filled and baking that I decided to Google “winter squash” to make sure these were indeed an edible variety. The outside was variegated unlike acorn squash, and they were super-tough to cut through. I had this panicked thought that I was attempting to eat an inedible ornamental variety, but it turns out that these were carnival squash – they kind of look like acorn, but the flesh shreds like spaghetti squash, and I guess the taste is somewhat of a mixture? I couldn’t tell…the squash taste was masked by the luscious innards.

For Mom’s birthday cake, I wanted to make something autumnal from scratch. I had this ideal image of a layered apple cake with caramel frosting of buttercream consistency in my head, but the end result wasn’t quite the same. 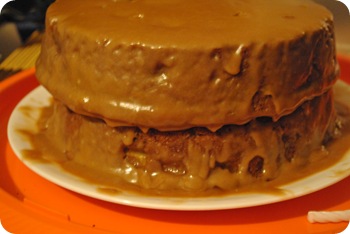 I thought the frosting recipe I chose would whip up to a spreadable consistency. Alas, it did not (my fault – see below), and thus after it was poured on, it seeped into the apple holes. 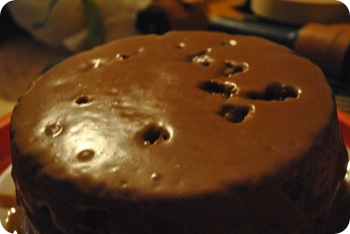 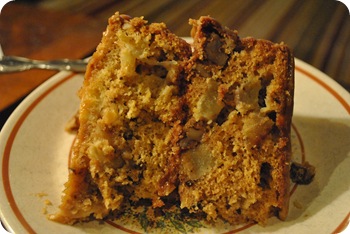 I used this recipe for the cake and was going to substitute applesauce for half of the oil, but when I found out we were out of applesauce, I used canned pumpkin instead. It turned out great! I also added some cinnamon, nutmeg, and ground cloves to it, and after consulting Twitterfriends on what variety of apples to use, I went with Granny Smith which were sturdy enough to keep their consistency during baking. This is the recipe I used for caramel frosting, and it looks like I was in too much of a hurry to read users’ comments; if I had, I think I would’ve been more successful at whipping it up into a spreadable consistency. I think I rushed the cooling process, so mine turned into more of a glaze than a frosting.

Lesson learned – when finding recipes on teh interwebs, READ REVIEWS to learn from others’ mistakes!

What’s your favorite apple-based dessert? I’ve made an apple tart with apricot glaze from a Sara Moulton recipe many times, and it has yet to disappoint!