I got a crazy notion to try homemade beef stew in the crockpot last night – I think I was looking for comforting, cold weather food.  Too bad it has been in the 70s and sunny for the past week…I’m ready for WINTER!

I made a few mistakes in my recipe, so next time I’ll (hopefully) know what to do differently.  I didn’t brown the meat first, and I cooked it either too long or not long enough – a few pieces were tough.  I threw the meat it in the crock pot and coated it with flour, salt, and pepper.  Next time, I’ll dredge it in flour, THEN brown it in a skillet, THEN add to the crock pot.  To the crock, I added EVOO, celery, carrots, onions, green bell pepper, garlic, sage, thyme, and some mustard powder, then covered it with beef bouillion and let it cook on high for a few hours.

About an hour before we were ready to eat, I started on the mashed potatoes – we had the stove working quadruple duty last night!  Good thing we didn’t trip a breaker!* 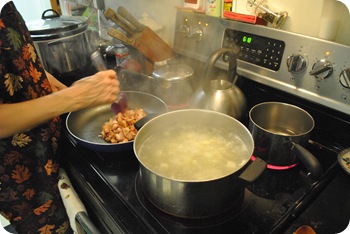 Once the potatoes were done cooking, I added some margarine and sour cream and mashed the crap out of them.  It was quite cathartic! 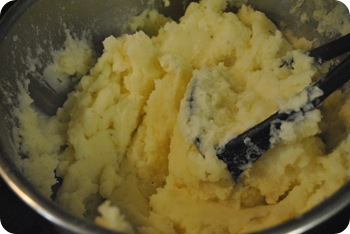 On the stove picture, Mom was cooking bacon for a particularly unhealthy hearty salad that my dad is currently obsessed with – it features bacon vinaigrette and is sure to take a few years off your life.  It’s good, but I don’t think it’s “worth it” to me…

So back to the stew – I added some tomato juice to give it a little more depth of flavor, and then when it was getting close to dinnertime and it was more watery than I would’ve liked, I ladled off a good bit of liquid and reduced it in a saucepan on the stove (but not before bubbling over and creating a most amazing smoky stench).  All in all, it turned out really well for just throwing stuff in the pot and hoping for the best!  Before I try it again, though, I want to look at some beef stew recipes and see what seasonings they use.  This was lacking something…. 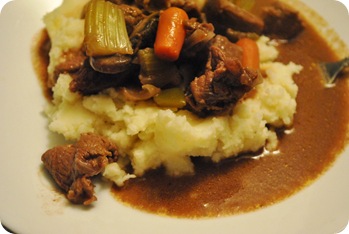 *So we didn’t trip a breaker maxing out the stove, but our water heater DID crap out and flood its room last night.  We were wading in about 1-1.5 inches of water, hastily moving stuff we’ve been storing in that room, and I found my first camera buried in all the old stuff.  Naturally, I took a picture with my DSLR: 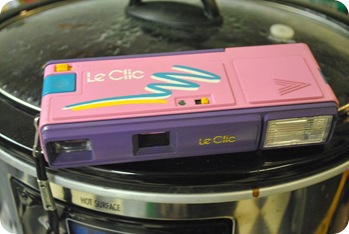 My little pink LeClic…I loved you.

As if the water heater room flood wasn’t bad enough, the wet vac motor overheated and exploded in a burst of smoke and fury, causing me to open doors and windows for the second time in a span of about 3 hours to let out the smokestank.  Good thing we had a second wet vac and about 8 billion towels.  I broke down in a mixture of hysterical laughing and tears a few times, but at least we got the situation under control for now.

And thank goodness I’m a member of the Y, because I think I’ll be showering there this afternoon.

What’s your favorite kind of stew?  Do you tend to follow recipes for that kind of thing or just throw stuff together?