Hey, remember when I used to run and exercise?  Yeah…I barely do, either.  I’m in the part of that energy spiral where I have NONE, so I can’t bring myself to go to the gym or park, so I don’t gain any energy.  I went jogging last week with Lofton and our dogs, and it was soooo tough.  We did 3 miles of walking/jogging, and it was a testament that I need to get my butt back out there.  I’ve got “plans” to go today…I NEED to make this happen.

In kitteh news, the little girl found her forever home with one of Mom’s co-workers and his family.  His daughters named her Bella. 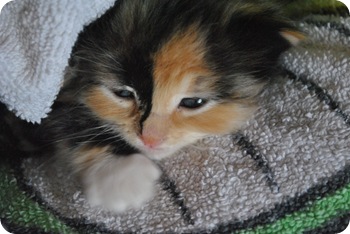 And these two nuggets are still with me for now. 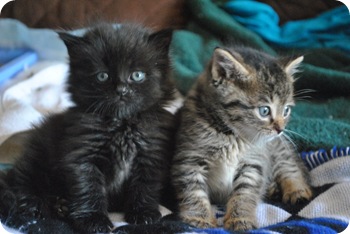 I’ve eaten several meals over the past week that look like this:

A variation of Moroccan stew made with a bunch of CSA veggies that were about to turn.  A huge crockpot of this goes a long way, and I don’t really mind eating the same thing over and over, as long as it’s tasty and easy.

Last Thursday, I went to Vista Lights in Columbia with Lizzie, Lily, and a few of my friends. 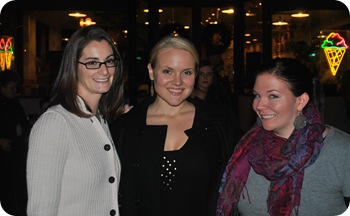 Hey ladies, remember when I was singing praises for my dry hair shampoo?  I obviously had a little trouble with the application.  Let me serve as a cautionary tale: do not spray thine scalp with white hair powder.

We were woefully underwhelmed by the event; they closed down Gervais street – a hugely busy street in the bustling area known as The Vista – for the occasion, and there wasn’t that much to do.  They had a few stages with bands and a bridal show (yeah, it was right outside a bridal boutique, but it would’ve been nice to have a regular fashion show for the rest of us)… 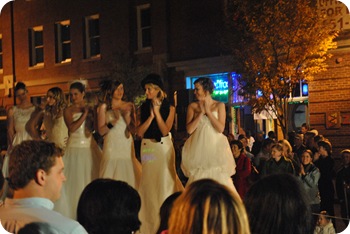 …but I thought there would be more vendors and booths and stuff.  I was under the impression that you could buy food from area restaurants at the festival, but that wasn’t the case.  They had beer and wine vendors and a rogue hotdog cart or two, but nothing special.  They did have a tree-lighting, though! 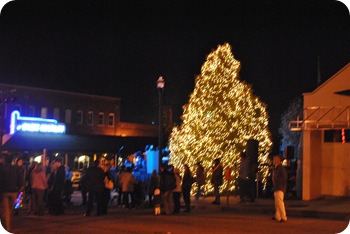 …which we totally missed, because we decided to eat dinner at Nonnah’s.  My only alcohol for the evening was a glass of merlot at dinner: 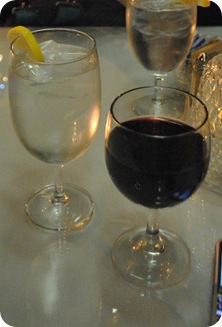 Instead of each getting a pricey entree, the three of us split some appetizers and each had dessert. 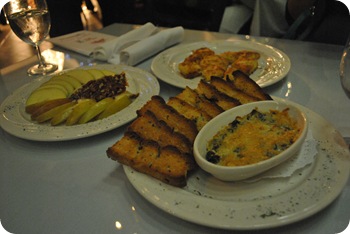 Spinach artichoke dip, crab something-or-others, and brie with apples and walnuts.  I also snarfed down a big slice of pumpkin cheesecake. 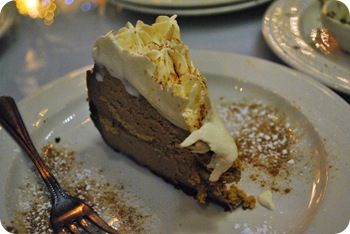 Good, but not as good as my momma’s.  I’m always tempted to try the lemon cake at Nonnah’s but usually fall for something chocolatey…thanks to a taste of Lily’s, I’ll get it next time: 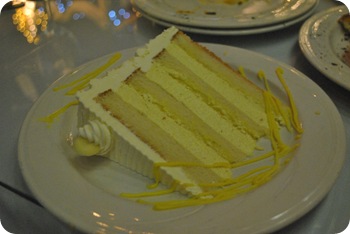 In case you were wondering, Lizzie got the pumpkin cheesecake too. 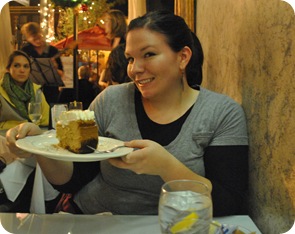 Though I was the only member of the Clean Plate Club.

Even though we were less-than-impressed with what Vista Lights had to offer, it was neat to walk around in the middle of one of the busiest parts of town with some great company! 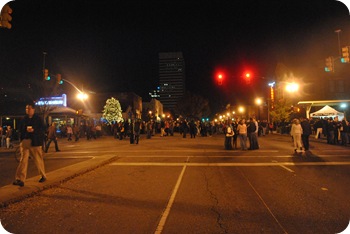 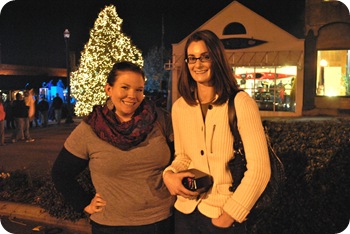