So, Lofton’s getting married.  Not news.  When trying on and ordering my bridesmaid dress, I was so used to being waaaay too big for the sample size that I refused to try it on, especially since it was at a posh little boutique where the staff and clientele usually turn up their noses at big girls.  The gals there measured me and found my bust to correspond to a size 12 (yaaaaay Itty Bitty Titty Committee!), my waist was a size 14 (ok, well…that’s…not as awesome), and my hips to a size 16/18 (screw every tape measurer that ever was).  I was resigned to ordering the 18 and altering the dress to fit me everywhere else, but after some coaxing, I finally tried on the sample for a laugh.

I was delighted every day after ordering my size 12 dress and took great pride in knowing that ALLLLL of the bridesmaids were wearing the same size.  While they were probably cursing having to wear a bigger size than they’re used to, finally I was roughly the same size as my friends.  I haven’t celebrated a milestone like that in a good long while.

So then the dress I ordered came in.  I don’t know if the sample had stretched or if I had gotten cocky in the meantime and expanded (“wooo, I’m the same size as my friends, bitchezzz!  I’m “normal!” I can eat whatever I want!!”), but I was afraid to even attempt to zip it up for fear I’d bust a seam. 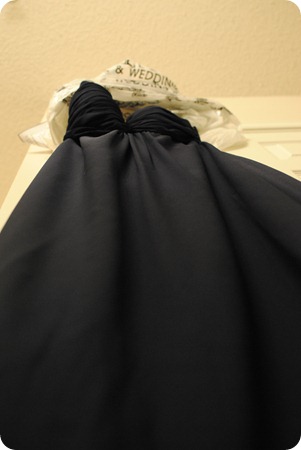 And thus began “The Dress Doesn’t Fit” Fit.  For the past 6 weeks I’ve been dieting and bingeing off and on - never a HUGE binge, but remarkably more splurges than I usually have, and always premeditated.  And in this Fit, I’ve realized something about myself.  When I’m up against a deadline, I’ll procrastinate until the last minute.  I’ll find everything BUT that thing to do.  I’ll drag my feet and fart around until it’s crunch time, then I’ll put my nose to the grindstone…and then find something that needs reorganizing…and then cram the work in really hard until it’s done, half-assedly and usually the wrong way.

Is it the thought of an externally-applied deadline that makes me rebel?  A deadline at all?  I did it in school, I’ve done it at work, and now I’ve done it with this stupid dress.  I tried super-hard to lose weight, FINALLY started losing again and even saw the 170s on the scale at work – a scale notorious for weighing me 3-5lbs higher than mine at home – only to bounce back and eat a bunch of crap I don’t need out of arrogance, celebration, or boredom.

So my theory is, the thought of having to do something “not fun” makes me want to do “fun” stuff all that much more (“hurry and have fun while you still can, before you can’t anymore”).  Ideally what I should do is weave the “fun” and “not fun” together to create a constant baseline of “…eh,” thus increasing my chances that my habits and activities will be more consistent and less yo-yo-ish.  Right?  That sounds so boring, but probably more realistically, I just shouldn’t stray too much from that baseline, either in restricting or indulging.  I’m not expected to be “…eh” all the time, but I shouldn’t go so far into one extreme versus the other.

Have you seen that concept of “from one extreme to another” or “rebelling against a deadline/goal” in yourself?  Have you successfully been able to beat that way of thinking, or do you still struggle with it?