Still alive.  Still hangin’ in there.  Trying to get a better routine going to keep myself healthy but also mentally sharp.  I have a tendency to zone out in the evenings after work, but I’ve been toying with the idea of (maybe?) going back to school (or at least thinking about it) and realize I do much better when I have structure when working toward my goals, whether they be personal, physical, or professional.

So tonight instead of surfing on the iPad or futilely putting away clothes only to have them get strewn about the bedroom again, I’ll get a leg up on some structure by writing a quick recap on what’s been going on lately.

Last I checked in, we had just done the Color Me Rad event in Charleston.  I’ve run a little since then, but it’s been either ball-sweatingly hot and humid OR it’s been raining nonstop.  I shouldn’t blame the weather, but I am.  Meh.  We’ve had some cooler days in the past week, so I’ve taken Maddy to the park several times just for a brisk walk.  The loop we take is a little over 2 miles, and it usually takes us 40-45 minutes (depending on potty and sniff breaks). 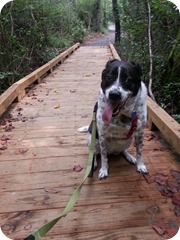 If you can’t tell from the picture, she’s totally freaking out.  I forgot how much I like going for little “hikes” in the woods, and now that we’ve started back doing it pretty regularly, I feel like I can keep the habit up a little easier, both for physical and psychological benefit.

Jason and I celebrated our year anniversary at the end of June with a gourmet-y dinner at home, just the way we like it: 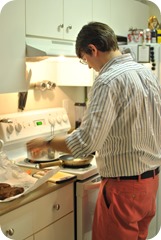 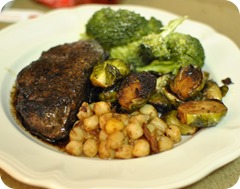 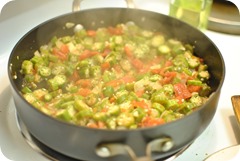 Fresh tomatoes, which I’ve never been a fan of until this year (now I eat at least one every day while they’re in season): 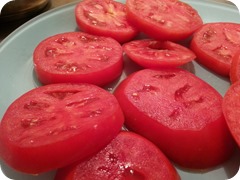 And zucchini “noodles,” made with our spiral veggie slicer thingy. 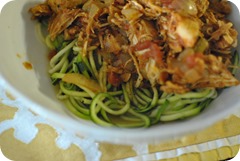 Hopefully we won’t get burned out on these any time soon…I could eat all 3 every day and be fine!

So part of my proposed Regimen to Betterment is getting to bed at a descent time (currently it’s 1am….strike against me there), taking my vitamins every night, doing some kind of physical activity every day – especially strength training (I had to go to physical therapy for awhile for some shoulder and SI joint issues, so I reeeeeally need to keep those in check with regular attention), reconciling budget/bank account every night (we’re trying to buy a house in the next year or two and are REALLY going to be pinching pennies for awhile to get there), and doing some kind of critical thinking, whether that’s reading a self-help book or some kind of social or political discourse online, my brain needs to work out more than it currently is.  So setting aside the time and attention to do this stuff is really the hardest part, when TV and Pinterest and Facebook and Candy Crush are so damned alluring.

About me introspection Milestones Work-life balance