Not your average spaghetti and meatballs.

Still so obsessed with zucchini noodles. 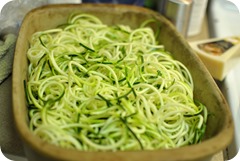 Friday night we made a “baked spaghetti and meatballs” dish with spiral-sliced zucchini, homemade tomato sauce, and meatballs made with a combination of ground turkey and some spicy Italian pork sausage.  First Jason combined the meats with a bunch of herbs and spices, then he formed the balls and browned them in a pan: 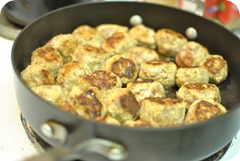 Then he sautéed some onions, peppers, garlic, and mushrooms in a pan before adding canned diced and crushed tomatoes, some tomato paste, and tomato sauce. 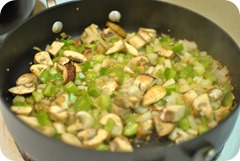 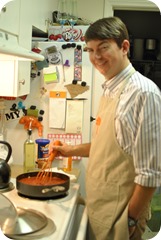 Jason is even cute when he’s blurry!  To put everything together, we laid the meatballs on top of the spiral-sliced zucchini and then covered the whole thing with the sauce. 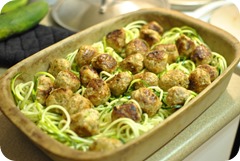 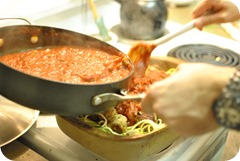 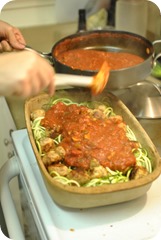 We baked it at about 350° for about 25 min total.  Next time, I might try to bake the zucchini a little to get some of the water out, because it kinda flooded the dish.  However, the whole thing ended up SO GOOD.  Especially with some grated Romano cheese on top. 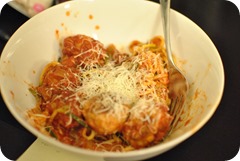 I freaking love the spiral slicer.  Also, we indulged a bit; back when Lay’s brought out their “you pick the flavor” campaign, we only found the Sriracha flavor.  Well thank goodness they brought it back – we finally got to try the Chicken & Waffles and Cheesy Garlic Bread flavors: 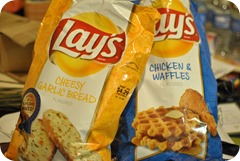 Too bad the Chicken & Waffles didn’t win – it was totally my favorite.  I love salty/sweet combinations like that.  One of the best things I’ve ever put in my face is the chicken and waffles at Early Bird Diner in Charleston – I doubt I’ll ever try anything else there because they’re SO GOOD.

Also we sampled a couple of mini bottles from the bounty we picked up at the liquor store: 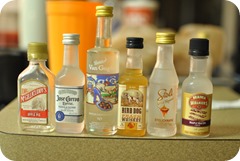 The best way to indulge without going too crazy!  The Van Gogh chocolate vodka was good, but the Dr. McGillicuddy’s Apple Pie Liqueur was definitely awesome – will probably buy that one again!

Did you have as wild and crazy a Friday as we did??

Around the house Low-Carb Products