Haven’t blogged since August…is anyone surprised?  I’m not.  I’m not even going to try to make excuses and apologies anymore!  Now that 2014 is in full swing and the holidays are over, I’m busy mostly with wedding planning!  Jason proposed at the end of December, and we’ve had to make the big vendor decisions now even though the wedding isn’t for quite a few more months. 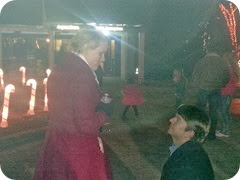 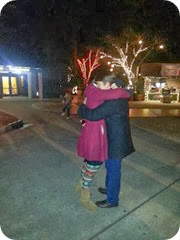 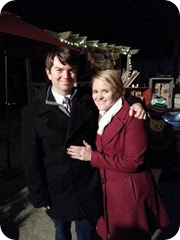 The first few weeks of January were crazy since I had no idea who we wanted to hire in the way of vendors, but now that we have a great team picked out and locked down, I’m much more calm about things now.  I’ve even got a dress (that fits, but I need to work a little more on some trouble areas!) and am now happy to focus on smaller, fun details for our big day!

Totally unrelated, but I wanted to share a recipe we tried last night from The Redefined Chef, Red Snapper Veracruzo: Horrible picture because I used the cell phone.  Who wants to get up to get their camera once they’re seated in front of this delicious dish?  We had some red snapper in the freezer left over from a giant Valentine’s Day cut.  I didn’t have any jalapenos so I used a chipotle in adobo which gave it a smoky spiciness.  Also I didn’t have raisins, but dried cranberries worked just fine.  I like these “all-in-one” dishes that yield a protein and a side all in one.

I’ve been maintaining my weight for about 2 years now, gaining and losing the same 5-10 pounds or so.  On the one hand I’m frustrated that it’s not as easy to lose as it was when I was bigger, but on the other hand I totally expect to stay the same with the “effort” I’ve been putting in to lose lately.  Jason and I are beginning to try to increase our activity levels after our winter/holiday slump.  We’ve been doing an arm-strengthening routine with our barbell set, and now that the weather should be warming up, we intend to pick up running again.  I hope to stay more accountable this time because blogging was such a huge help before.  I’ve gotten away from the culture of healthy living – which isn’t to say I’ve been “unhealthy,” I just haven’t been 100% committed to improving myself – and would like to get back to that mindset of making better decisions and doing all I can to get healthier.

About me Events Exercise Other Peoples' Recipes Wedding