Posted by Kat on July 08, 2018
So I "started" doing the ketogenic diet back in September, but I really haven't stuck to it...like, at all.  And it's pretty easy to gain weight when you repeatedly slip up and eat a bunch of carbs and then continue with low-carb, higher-fat foods.  Flash forward to now and I'm up 20 pounds.  So I'm giving it a hardcore try, realizing I cannot cheat.  Cheating is simply NOT an option on this diet.  Depression has really taken its toll on me in the last few months, and it's directly correlated to my weight, causing a vicious cycle of overeating and gaining.  I have to give myself a solid chance by getting my feet under me and gaining some traction when it comes to weight loss, so I'm giving the keto diet a true shot.

I'm down a few pounds over the past few days, but I've been playing with the same 5 pounds for weeks now, so I'm not reporting a true success just yet.  I have my first milestone in sight and will definitely report when I hit that, but for now I'm just plugging along.

I've joined a few groups on Facebook for support and ideas, but I haven't been super-active in them, save for one post.  I made some avocado brownies and was less than enthused with how they turned out initially (I since have doctored them up - legally - and am calling them a win), so I posted them to one of the groups saying they tasted like Satan's butthole.  I got power-hungry really quick with over 1300 reactions....mwah-ha-ha! 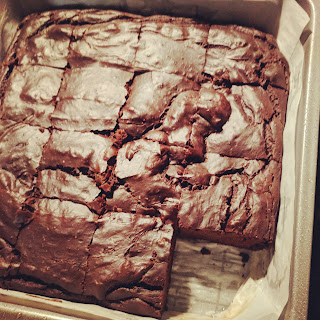 The recipe I used is this one from Delish, and it turned out waaaaay too bitter and salty.  Some of the tips I received from my Facebook post were: 1) Stevia can make things bitter, 2) similar recipes called for half the amount of cocoa powder than this recipe did, and 3) leave out the salt.  I won't count this recipe out again, but I will definitely tweak it using those recommendations.  On the upside, I asked group members for some of their fave no-fail recipes and got a few clear-cut winners with many recommendations, so I'll give those a shot!

This morning for breakfast I wasn't feeling the regular omelet option, so I made this egg-loaf "French toast." 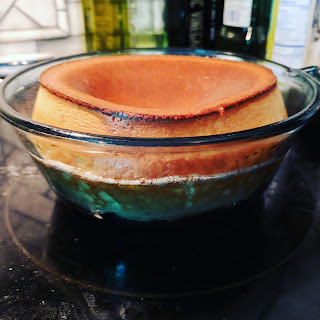 The recipe was stupid-easy: 4 eggs, 4 oz cream cheese, 4 Tbls melted butter, 2 Tbls Swerve sweetener, and I added liberal amounts of cinnamon and nutmeg.  I blended them all in the bullet and poured it into this small oiled dish.  After 30 minutes at 350, it came out custardy, tasting very similar to French toast.  We ate it with this sugar-free "maple syrup" from Amazon.  I'm excited to try this recipe again as pancakes or smaller muffins!

One thing I'm finding difficult about this diet is waiting for hunger to abate.  I know from reading other people's testimonies that once they are fat-adapted, intermittent fasting is easy and hunger is a non-issue.  As someone who eats for pleasure too often, this waiting period sucks.  I tend to rely on instant gratification and am the most impatient person I know, which is why I've failed at this so far.  I see so many people's success stories of "I lost 20 pounds my first week" or whatever, and when it hasn't happened to me, I quit.

Also, there are too many conflicting sources of information.  The people eating steaks smothered in cheese and butter either seem to have hundreds of pounds to lose or are at their goal weight.  Calories matter, so it's disheartening to see so many good recipes out there and feel like I can eat them all as long as they are "keto," when really I can't.  For someone with 50 pounds to lose, I don't think I have the option at this point to eat as much as I want of keto-friendly foods and still expect a loss.  Finally, I'm finding it difficult to stay under my protein limit.  I know, carbs are a limit, protein is a goal, fat is a lever, but it's not hard for me to reach my protein goal/limit by midday.  Finding a routine that will work for me while still keeping things interesting is going to be challenging.

But I'm up for it.
keto Low-Carb Recipe